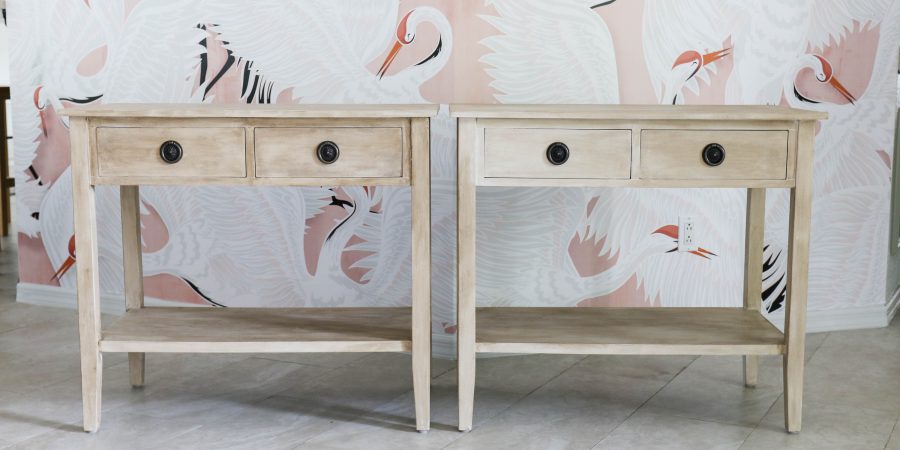 Can you believe these nightstands are painted?! When I painted a couple frames to look like wood, I had a lot of questions on whether they this technique would hold up on doors or tables. The answer was: I don’t know!

So I decided to find out. I tried the same faux wood painting on these two tables.

🎗September is childhood cancer awareness month. My friend Kell @simplyhandmade on Instagram came up with #diyforacure to raise awareness. Her beautiful boy Donald was diagnosed last year and she’s fighting every way she knows how. Even with her gift of DIY.

As this group works together on our DIYs it is our hope to 1) bring awareness to the lack of funding and resources for children with cancer. Only 4 percent of cancer research funding goes to children. And 2) ask for donations that go directly to this research.

The money will go to MSK Kids, (Memorial Sloan Kettering Cancer Center’s pediatric department) where they are doing groundbreaking research for these children. This is where I have chosen to donate my blog’s 20 percent tithe from the third quarter of this year.

Ok, Let’s take a look at these nightstands, shall we? We’ve had these for about a decade and I’m not so into black furniture anymore. So let’s make them look like wood! This is the coolest technique I’ve done in a long time and I learned it from Natalie at Vintage Porch. SO many clever ideas on her blog.

When I painted the frames, I just used two steps: painting on flat paint and rubbing in some antiquing wax. But to make the nightstands more durable, I’m going to add two more steps.

First I took off the hardware and lightly sanded so the bonding primer would have something to hold onto. These nightstands are not real wood so I’m using a finer 200 grit sandpaper so I don’t ruin it. This is my new (not sponsored) Dewalt sander and it’s been great.

I washed the tables and then primed them. Don’t skip washing them well! In order to avoid confusion, I’ll tell you what I should have done and then what I actually did.

What I did: I went ahead and used the water-based bonding primer I already had. I gave it the ol’ fingernail scratch test to see if it would hold up and it failed. Sigh. So I went to Home Depot and looked for the shellac primer and they were wiped out. All I could find was a spray paint can of oil-based primer so I went with it. THEN when I sprayed, it left a weird texture and residue. Ugh! So I sanded that down with the sanding block and carried on.

That’s the life of DIYer! You can’t get irritated, just keep moving forward and figure it out.

I added two thin coats of the flat Burnished Clay with my trim brush, paying special attention to go with the grain and look out for drips. Thin layers is key!

Typically you want to avoid brush lines, but in this case, we actually want them. This is what the wax will nestle into and make it look like wood grain.

Now for the fun part! Put on your gloves and rub in the antiquing wax with a clean rag. You are going to be AMAZED when you see how much it looks like real wood!

When I dipped the rag in the wax can, I found it helpful to put the first glop of wax in the middle of piece and work out to avoid getting the corners too dark. Be sure to take your time rubbing it in evenly. Use less for a lighter bleached look and more for a layered rustic feel. You can watch my YouTube video below to see exactly how I did it.

And now for the fingernail test! I let these cure for a day and then gave them a good scratch on the side in an inconspicuous spot and … they held up! It worked! Hooray!

Now I haven’t left a water cup there to see if it stains yet, but I imagine the antiquing wax will seal and protect against that. I’ll be sure to update this post if I find a problem.

And finally I added this hardware from Hobby Lobby. I’m so grateful at least one of these decor stores still carries knobs! Most stores only carry them online anymore. Home Depot had a boring selection, so I went to Anthropologie, Pottery Barn and World Market with zero luck. But these look great!

And here they are back in their spots in our bedroom. I love how much dimension they add. Before it was dark on top of dark, now it’s much brighter.