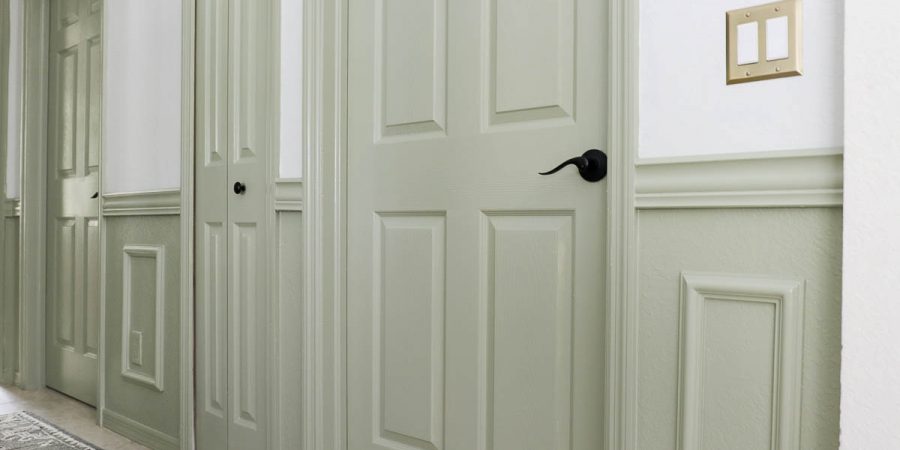 I’m still over here painting things sage and this project did not disappoint. Even if it did take me probably 5 months to finish! Come with me, let me show you my hallway’s new look.

Here’s a look at the before:

This hallway has so many doors and is fairly dark so I wanted to give it new life. The only problem is I didn’t have a plan. I added easy wainscoting with pre-made forms (find the DIY here) a couple years ago and it added so much character! Then I painted the bottom white and the top Behr Light French Gray. And it was fine. But I wanted something a little more dramatic.

So I primed the doors with Bulls Eye 123 Primer and then used a scuff-defense enamel in Benjamin Moore Sage Wisdom. This is my new favorite color. I can’t stop painting things this pretty green color. I painted the playroom, the front door and my bedroom ceiling the same color. It’s so calming and pretty. I also like the way it ties the same color palette throughout the house. For so many years I just painted whatever color I wanted without thinking about a whole house color palette.

So I started painting but I’ll be honest, I’m sick of painting at the moment! So I took a break that turned into months. My rollers dried out. My paintbrush rusted in the cup of water I left it in. Anyone else have a project that just turned into the never-ending thing?

But one day I made myself pick the brush back up — ok a new brush. And I committed to painting two doors a day until it was done. And that’s the thing about DIY. Real life is not a time-lapse video or immediate gratification. It’s putting the hours of mundane work in that make a difference in the end.

I couldn’t decide what to put on top. First I thought maybe I should do everything sage. Then I thought wallpaper might be fun, but when I looked around at the rest of our house, I knew white would be the right choice.

I chose Benjamin Moore Paper White. It’s a slight gray white that doesn’t let the walls play yellow in any light. And by the way, I had these Benjamin Moore paints mixed at Home Depot by telling them the name. It helps to have to code handy on your phone as well from the BM site.

And then I decided to take things one step further and paint the old hinges black. I had a lot of questions about this on TikTok, like will it hold up? What kind of paint did I use?

I used black enamel in semi-glass because that’s what I already had. And I’m not sure if it will hold up, I’ve never tried it before! But so far so good. It adds a subtle detail that I love and ties in the handles.

It’s so difficult to photograph this hallway because it’s fairly dark and small, but here we go:

I love the green that peeks through the kitchen.

And here’s a view from the office.

And I’m still loving my tiny little cleaning closet at the end of the hall that I made over last year! It’s so handy to finally have everything in one place.

I’m not done with the sage yet either! As soon as the mood strikes to pick up a paint brush again (yikes) I’m going to paint the door in our bedroom as well as the lanai exterior doors! Do you have a favorite paint color you use over and over again?

Here’s the 1-minute video on TikTok:

♬ Love with Your Life – Hollyn