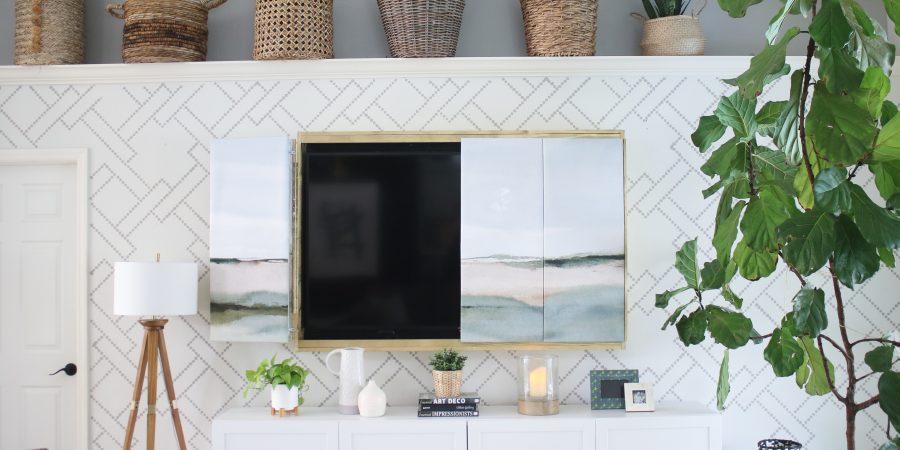 I wanted a way to hide the big black box! The new TVs with frames and digital art are cool, but expensive and I wanted an option that worked without having the TV on all the time. So I decided to make a frame with art canvas panels that open like binary doors. And you guys! It worked!!

I say that with an element of surprise, because well, I’m not a great carpenter. As far as power tools go, I own one small miter saw and a drill. And I tend to cut things the wrong length! But I took my time and made it happen this project.

Moral of the story: It’s good to try new things and it’s ok to make mistakes learning to do them!

This is the before picture. I mounted the LG 70-inch tv to the wall with this wall mount kit and used this cord hider kit. It’s easier than you think!

And here’s my specific list for a 70-inch TV:

I measured and planned out how big I wanted my frame.

When I selected my boards, I looked for the nicest, straightest pieces.

I used my miter saw. Don’t be intimidated when I say this! I bought this last year as an experiment because it was on clearance for $38. (If I were buying one at the same intermediate level, I would buy this one.)

I tried it for the first time and was SO excited. All it does is lift up and cut down for you, that’s it! You can do this!

My miter saw wasn’t big enough for the whole board, so I had to flip it over and come from the other side as well.

If you don’t have a miter saw, Home Depot or Lowes will cut it for you! Just make sure you have the exact measurements.

Next, I lightly sanded the cut edges.

Each board has a slight curve or imperfections, so I took time to lay them out and kept flipping them around until it fit together best.

I wanted the two side pieces to run the whole length of the sides so you don’t see the raw edge, so I built the frame with the top and bottom pieces fitting inside of those.

I used trim screws to make my frame. They are small enough to patch, but have the holding power of screws.

Because they are so thin, they need a special drill attachment. And it comes with the screws!

I just used one screw in the center of each joint at first so I could easily adjust the frame to make sure the angles were perfect.

I used two inch pieces inside to screw into the wall studs in the back.

I spray painted the frame gold to look like a frame.

And black for the pieces in the back to mount to the studs so it would blend in with the TV.

And this is where you see I didn’t know exactly where I was going! I thought I would have plywood cut to fit my frame, but it was too heavy. So I opted for canvases. They had the thickness I was going for and a wood frame to drill into, but much lighter than wood.

I used 8 16×20” canvases from Hobby Lobby to make my panels. I stacked two and stapled them. I added a couple nails and duct tape for extra support. I caulked the seam to it would look like one panel.

If you were a pro, you could build your own canvases to the perfect size, but I’m not! And I know that a couple would be wonky and not line up straight. So cobbling things together is my jam.

I bought a beautiful digital download watercolor image ($5) from Etsy and had it printed as a large format, 4-color poster online at Office Max.

I had to split the image in half to be large enough, so I ordered two 36×48” posters. That was the most expensive part of the project ($98)!

I used adhesive spray and a staple gun to wrap the canvases in the posters.

I don’t want to confuse you here, but because I went with these canvases, my doors were a couple inches short on the sides and a little over 3 inches top to bottom.

So I added two vertical trim pieces to the outside doors. I ended up using brackets like this on the ends because my screws were splitting the wood. There’s just one trim screw in the middle

And two pieces/lips to the top and bottom for the doors to rest on. I caulked just a few spots that had minor gaps.

Next, I added the piano hinges to the doors can open all the way. I had to take my time and think through this part and make sure I didn’t get them backwards. I love that the brass matches the gold paint! It helps them blend in.

We mounted the frame to the studs. We located the studs with a magnetic stud finder. Predrilled through the frame and wall and then used 4 large lag bolts to hold it in place. You screw these in using a socket wrench.

We had to prop the frame up on boxes because it was too difficult to hold in place while someone drilled. It worked, it’s level.

Hanging it was the only part I needed help with!

And finally I painted the slivers of white wall that were showing in the back. I wanted the TV to blend in completely with the wall. I hung the Roku with Velcro.

My only complaint is that the doors are ever so slightly off. This irritates me because I spent so much time making sure they were perfectly even when the frame was lying on the floor! The frame must have shifted slightly when we mounted it. I think I’ll live.

So that’s it, no more black box! This project wasn’t all that difficult, it’s just that I didn’t have a clear plan when I started and had to go to Home Depot 300 times. (Is it even a real project if you don’t go back at least 10 times?) But I’m happy I persevered and pulled through. It makes this room feel so much lighter.

I had lot of inspiration from Pinterest and combined different ideas from some very talented people. Here’s my Hide the TV Pinterest board if you need some inspiration.