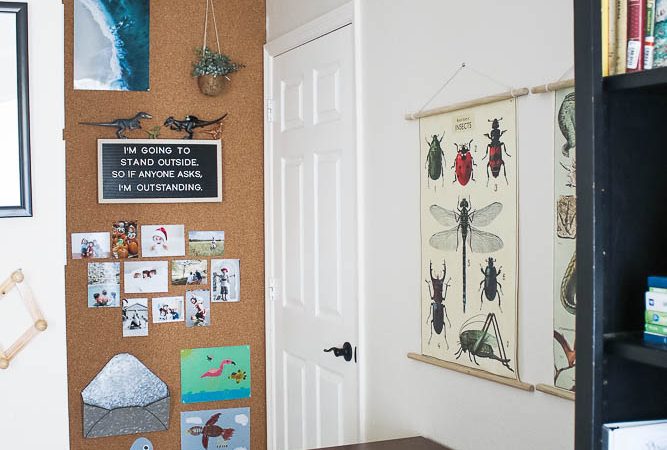 I added workspaces for the boys and an entire wall of cork board for all their master planning! It was super simple too. Maybe this will mean the end of duct-taped pieces of paper everywhere??

I’ll give you a little tour of all the updates and show you exactly how I put the cork up — no power tools, no glue and no plywood!

So here’s what this side of the room looked like before:

And here it is with desks and the giant bulletin board:

The cork adds so much warmth and texture, doesn’t it? I’m so pleased with it. It gave a blank wall behind door function.

I styled this for some photos, but I told the boys they could do whatever they wanted with it when I was done, so now it’s covered in drawings of LEGO. Because if they’re not playing them, they might as well be drawing them!

I love it though. LEGO is seriously the best toy. It uses cognitive skills, following directions and creativity as they build their creations. You can see all my favorite toys by age here.

Work from home, school from home, it’s a new virtual world. And most of us weren’t prepared to come up with kid workspaces this fall! At least I wasn’t.

When the kids started virtual school I thought they could sit around the dining room table, but with each child having different breaks, distracting each other and needing to access all their things, it was clear they needed actual workstations.

I added two desks to the boy’s room and Clara already had a desk in her room. I also can’t wait to show you how easy the cork board wall was!

I was quite pleased with these wooden desks ($150). They don’t

After the first week of virtual school, it was clear we wouldn’t make it. Or I guess I wouldn’t make it! I was running back and forth all day from room to room, making different lunches at different times, trying to figure out why microphones weren’t working and making kids stay in their seats.

Clara (in kindergarten) figured out how to turn her mic and video off, and once I walked in to see her playing Barbies! On top of that we lost internet for a week!

So the kids are back on campus now, but the school still has occasional virtual days so we can make up for starting the school year late.

Here’s what the other side of the room looks like. You can see how I put up the board and batten wall and stamped stars on the ceiling in this post.

I also have a tutorial on how to to make your own poster hanging kits. It’s so cheap! And the posters are too.

Ok! Let’s get to work on the bulletin board wall!

This is the giant roll of cork I ordered. It is 4 feet wide and 25 feet long! Be warned it smells funky in the first few days, but it fades.

Measure it twice. It difficult to get a straight, clean cut on the cork when it’s already on the wall.

Our wall is only about 3 feet wide, so I marked off the measurement every foot or so. Then I used my level to “connect the dots.”

Before I measured though, I did a test to see how thick the cork was and the answer was: not thick enough! The tacks would have gone through and punctured the wall.

I saw tutorials that used plywood and glue and all kinds of creative solutions, but as I had SO much cork, I decided to double up!

So I measured for two pieces of cork instead of one.

Here’s how to break off the blade of you knife for the sharpest cut:

You simply remove the bottom, turn it upside down, cover the blade and break.

If you want to try scissors, you can use a kitchen knife sharpener to sharpen your scissors.

I decided to try carpet tape to hold the pieces together! I had this left from our living room rug and remembered how sticky this stuff is. And it worked. Remember, eventually they will be nailed together, so this is just reinforcement.

Marcello had to help me hold in in place until I got the top securely nailed. You can see in the video at the end.

The finishing nails are barely noticeable. You could even paint them if you like!

And that’s it! It’s a simple project and makes a huge impact. I still have cork left and am wondering which wall is next.

To style it, I laid out pieces on the floor first.

Easy affordable art! These large posters are $9 an

Rainy day, so I am sitting here trying to get comp