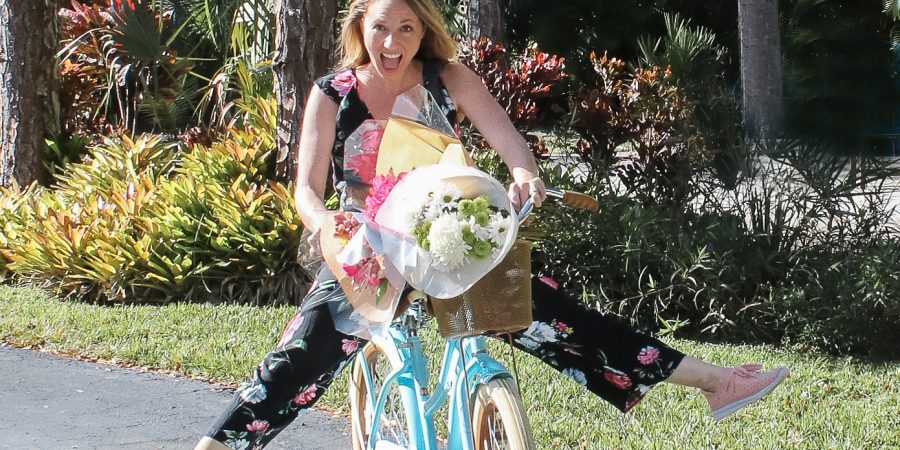 Having a budget set aside for this has been such a treat in my life, but it didn’t start out that way. It began from seeing hate — a man screaming at another man in a parking lot. A woman yelling at another woman from her car, calling her names and using terrible gestures. A woman and her daughter walking after another woman and her daughter, taunting and saying despicable things because she wanted a particular parking spot. I won’t go on because I know you’ve seen these things too.

One day at Walmart I was so disturbed by one of these scenes that I began fervently praying as I walked quickly down the aisles. “Lord, why have you shown all this to me in the period of just one week? What must I do? What can I do?”

How can I, one person, change the selfish, angry darkness here? What I was about to learn is that I might not be able to bring light to my entire city or state or country, but I can bring the light of Christ right where I am. Right in that situation, right in that interaction, right in that split moment of time.

After I finished praying, a thought popped into my head! I’m going to buy the prettiest, happiest bouquet they have here and give it to someone!

I walked even faster the flower section and chose two of the happiest bouquets.

And here is what happened:

As I stood there awkwardly waiting for someone to walk in the door, I prayed. “Who is it, Lord? Who do you want to have these flowers?”

Just then a woman walked through the door and said “Oh! Are those for me?”

“Yes they are!” I told her. She assured me she was joking and smiled. I told her I was very serious and had prayed about who to give them to. “God loves you and wanted you to have them.”

Tears welled in her eyes. She slowly took them and then began to tell me what a terrible day she was having. She had been away from her children for three days and had a very important test to take that day that her career depended on. Suddenly she was smiling instead of worrying.

After that, I continued to have experiences of hugging strangers through my car window. Hugging strangers in the Dollar Tree, Target, Home Depot parking lot, on the side of the street. Occasionally people cried. Actually up to half the time people got tears.

One woman and her daughter were borderline weeping because the elderly woman had just received devastating medial news. One woman praised the Lord because her daughter had just passed away and she felt loved in that moment. One little girl’s dog just died and her mom just couldn’t get over it.

I gave flowers to the woman ahead of me in line at Target and she started crying. I had to hold her up for a moment. “Don’t cry,” I said. “God loves you. I always pray about who to give them to and here you are.”

“I will cry,” she said. “The whole way home.” I don’t know what was going on in her life but she needed love in that moment. And I feel so lucky that God could use me.

There are many tearful moments that go like this, but there were also awkward moments. One man refused them. Actually Clara was holding the flowers. “It’s just a random act of kindness!” I said as he walked away.

“Well, that was rude,” Luca said. Clara, however was unfazed. I loved that! Right she was — his problem, not ours.

It’s true I did pray before each floral gift, and what I often found was an empty parking lot! Suddenly a big box store or normally busy sidewalk was a ghost town. And then one person would emerge from their car or the store.

And probably half of the time it was a grumpy or stoic person. And let me tell you, it is much more fun to give flowers to a sweet person! But God loves the lost and the angry too. I dare say they need love and a bright spot more than anyone!

And there we would be. I tell them these flowers are for them. They look at me skeptically, waiting for the pitch. When they realize there is no pitch, sometimes I catch a half smile. Sometimes they don’t think to say “thank you.” Sometimes it feels like a waste of time and money. But it isn’t. It isn’t.

I don’t know how they feel as they walk away or the impact it has on them later. Sometimes when I look back I see they’ve lost their way to their car or they look confused. It’s thrown them off track in the best way.

Here’s how I changed:

I began to see people as souls, not just someone in my way.

People were kinder to me. I experienced the world in a new way. People smiled at me, opened the door for me, asked about my day or kids. It wasn’t that the world changed, it was that I was smiling. I was complimenting people and radiating love that God put in my heart. People are drawn to that love and it’s byproduct, kindness.

I had the experience of hugging strangers in parking lots, through car windows and in the middle of store aisles.

These interactions affected by-passers as well! I wasn’t paying attention to others, but often out of nowhere a person would say “that’s the coolest thing I’ve seen all week.” Or I’d hear “that’s awesome!” yelled from somewhere down the parking lot. You never know who’s watching and how your actions are influencing others — for good or for bad.

I learned to give people the benefit of the doubt. I heard heart-breaking stories of where they were at emotionally in that exact moment. You don’t know what that snarky person in front of you has been through that day or in that year or even their childhood. Love will bring about love, not hate. The nastier you are to that nasty person, the meaner they will become. Show them the same grace your savior has given you.

My opinion of “people” changed. I don’t like it when I hear people say “I hate people” or “people are stupid” or say something to the affect that they’re smarter than everyone else. We can’t lump each person into a category of “people” and label that group as stupid or ignorant or lesser than you. We each have a story and a spirit and a God-given life that needs nurturing to grow and mature and find the narrow path to Jesus.

My challenge to you

Here’s my challenge to you: Try to leave a person more uplifted than he or she was before your interaction.

I’m not talking only about family and friends. I’m talking about EVERYONE you encounter. While you’re driving, let the person into the lane. Wave to the person who let you in! Smile at the cashier and tell her she’s doing a good job instead of complaining that they need more people.

Not only will these small acts change the space around you, but it will change you. You will feel happier, more content, less entitled. You will experience Jesus like never before. After all, as you move closer to those around you, He moves closer to you.

I hope I’ve inspired you to be kind to strangers. After all, you don’t know what they’ve been through or experiencing right now. But I have some tips to share that I’ve learned the hard way, haha!

Let the first words out of your mouth be “random act of kindness.” I’m laughing as I type it because people will think you’re trying to sell them something! Nothing is for free, right?

Watch this video, below, to see what I mean! This lady had so many questions for me!

Another tip is to give flowers to people who are leaving, not entering a store. This way the store won’t try to make them pay again!

Pray about who to give the flowers to! When I leave the store I pray “Father, who are you giving these to today?” I cannot tell you how many times the parking lot is then completely empty, a ghost town!

Don’t discriminate who you give to. You might not even know you’re doing it, but give them to whomever it makes sense to give them to first. Not an attractive person or nice person or because someone did something kind for you. In fact, the angrier person, the less socially-accepted person is the one who needs them the most. Those are the people who need to see and experience God’s love.

Don’t expect anything in return. You aren’t doing this for a pat on the back or so others will think you are a good person. You don’t even need a thank you or to tell anyone about it. You’re doing this to genuinely brighten someone’s day!

A generous person will prosper;
whoever refreshes others will be refreshed.
— Proverbs 11:25

5 thoughts on “What I learned giving 53 bouquets to strangers”

I AM DONE! This bathroom is FINALLY finished! I’

I found these pretty illustrations on freepik.com.

Whatcha think of the moulding I added to the walls

After focusing on projects for too many weeks, I h