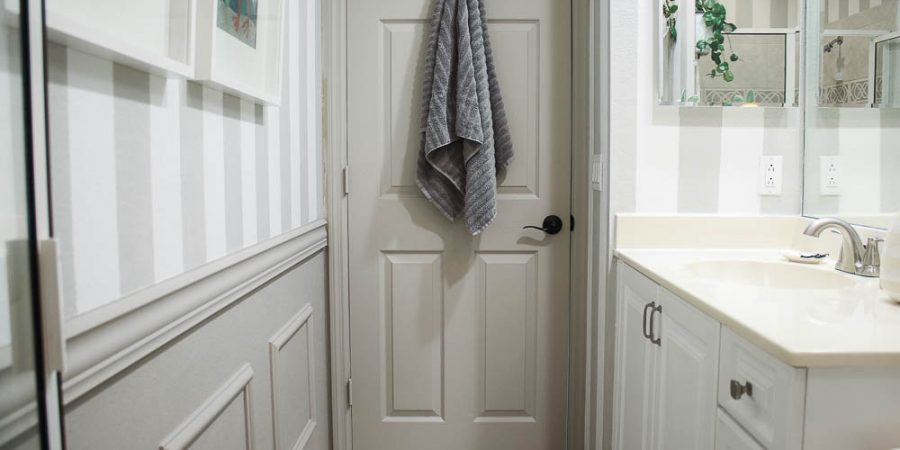 Paint transformed this standard beige builder’s bathroom and gave it some needed dimension and personality! I painted stripes, added simple wainscoting (with no power tools) and even painted the door and shower accent tiles.

And the award for bathroom with the worst lighting ever goes to … ME! Heavens, these photos are rough. This editing was the best I could do, so perfectionist me just has to move on :) It was super budget friendly and I have a ton of new tricks to show you in this post!

First, let’s take a look at a couple before shots:

It’s really come a long way. I’d love to rip that vanity out with the yellowing countertop, but I choose to love this space instead! One day we’ll redo bathrooms and kitchen, but for now, I’m having so much fun updating them with paint and elbow grease.

I’ll give you a little tour and then show you all the DIYs.

Here’s what I did to the bathroom. And I’ll go into further detail about them in the post.

I painted this tile with porch and floor paint that I had from another project. It’s holding up fine because it’s higher up on the wall and gets no traffic.

HOWEVER, I have done a lot more tile painting since this project, and if I were doing it now I would use oil-based enamel paint in semi-gloss.

It was the first thing I did in here because I passionately dislike the color mauve. I slept better that night.

I had to take down the ceramic towel bar and toilet paper holder. These things were a PART of the wall. I mean, whoever put them in wanted them there for LIFE.

I scored the caulk with a utility knife and had to patch the holes with this drywall repair kit. My patch job was subpar to put it nicely. The blue tape is where I wanted the chair rail to go.

After I patched the wall, I painted it plain old white from the can. Pure white. No fanciness here.

If I can do it with paint, I’ll skip the wallpaper every time. It’s more cost-efficient and you can just paint over it when you’re done with it!

Here’s how I painted the stripes Light French Gray. Here’s my house color palette too, if you’re interested.

I painted the bottom of this wall French Gray and the stripes Light French Gray. I thought there would be more of a contrast than there actually was!

I have a whole post on the easiest wainscoting ever, but it’s basically putting a piece of chair rail (shown) …

And adding these preformed frames! So simple, but such a big difference.

Then I painted all of it with the gray.

I LOVE painting doors! I’m addicted. I’ve painted the entry door black. The side door of our garage green. And the inside of Clara’s door blue/green!

Here’s how to paint an interior door:

That’s it! It doesn’t take long and makes such a bold statement. I would advise letting the bonding primer cure for a few days. The can says 7, but … use your judgement.

This primer sticks to EVERYTHING! Painting the door doesn’t work without it, I tried in Clara’s room and it looked terrible. I’m using it on all kinds of tile projects too!

I wanted a toilet paper holder on the side of the cabinet, but didn’t want to drill here. I was looking for an easy out so I searched for a self-adhesive toile paper holder and don’t you know they make them! And it’s actually really nice quality.

It’s stayed put fine for a month now. And so has the one in Clara’s room. The reviews sounded like the stay better when placed horizontally, so that’s what I did. I also did it at a slight angle so the roll would stay on better. This was SUCH a good purchase.

Gray towels always for boys, hides the stains and dirt:) I found this double hook for $3 at Home Depot.

But the star of the show were these self-drilling drywall anchors and screws! I had no idea these existed and CAN’T believe I’d never heard of them!

You just screw the anchor in with the drill, and then screw the hook on! That’s it! I’m sorry I’m yelling at you, but you need to know about this!

No more plastic things or odd contraptions to anchor things. Just drill it in and it can hold up to 50 pounds. I used to ask Marcello to hang everything for me because the plastic anchors make me feel stupid, haha! Now I’ve put up hooks and shelves solo.

The fastest way I know of to update a bathroom is to add plants! They transform and give life to any space. The two on the bottom are faux, but the hanging plant I’ve had for years. It’s hardy, but I don’t know if it will make it in the dreary bathroom. I’ll probably have to find a good looking fake plant to hang there instead.

And finally, I asked my son to draw a couple of his famous birds for some 16×20 Ikea frames I had. I painted the background with the same color as the accent wall in their room. I love them!

While I was at it, I just painted this hallway space Newburg Green too! It’ adds a fun dimension to this transitional space.