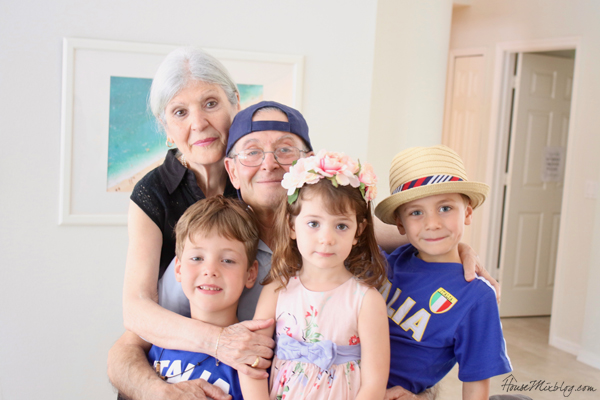 Marcello’s parents are here! They’re finally here! For those of you who haven’t followed along, my in-laws, Lina and Dario, just moved here from Italy. It’s been a long process of immigration paperwork and waiting. After more than two years of suspense, they were approved out of nowhere and given four months to move to the United States!

Marcello and I listed our house that very week and got busy looking for the right house for our new family dynamic. Within a few weeks we had sold our house and found a new one that had a guest house. In a series of amazing events, the house of our dreams actually became ours. You’ll have to read how God moved us, because I can’t even begin to summarize it! Meanwhile, Lina and Dario were busy selling and giving away nearly everything they owned and clearing out their home of 30 years.

The point I want to make in this post is why this new house and space is so important to this family, especially my in-laws. Their journey through this life has been difficult, sometimes sad and very sacrificial. Moving to a new country is a radical change for this couple in their early 70s. They don’t speak English. Until their son moved here a decade ago, they had never thought about a life outside of Italy.

So why the big change? There are a few major reasons. For one, they lived in a building owned by the government that had began to decline. There were too many tenants packing into the small condos. Break-ins began occurring regularly and they didn’t feel safe.

They also felt lonely with their son and grandchildren so far away. Skype became a way of life around here! Any of our friends who visit have surely made an appearance on Lina and Dario TV. Most of the time it was cute, they would just watch the kids swimming or playing and chat with Marcello. Then there were the times when I didn’t know the computer was on and I’d walk out sleepily in my pajamas or holler at the kids!

One of Marcello’s major stresses was how he was going to care for his parents when they were elderly. Bringing them here would take time. Clearing out their house would take months. People don’t just pick up and move frequently in Italy — it months to shut down services and notify the government of changes. I would say this process has been one of the most stressful experiences of his life.

Last night the four of us adults and the three kids were sitting around the little fire pit in the driveway. “And look at me now,” Dario said in Italian. “The same boy who lived off a sandwich of bread and anchovies.” He was referencing the lunches his mother would pack him back in Napoli when he started working full time at the age of 13. He said she was an expert at packing food as though it were a nice big sandwich, but once it was unwrapped it was a small piece of bread with anchovies.

It seems the appearance of having food — even if you really didn’t — was important in the tough times south of Italy last century. When Lina was young her mother sold bed linens. If she came home at the end of the day with her bags full it was disappointing because she hadn’t sold anything and there would be no money for food. If she came home with empty bags, she and her brothers and sister were excited because there would be food on the table. She remembers being fortunate enough to have red meat sauce one night. She did not wipe it off around her mouth. Instead, she left it so she could show the other kids that she had pasta with sauce. Lina’s dad passed away when she was two. Her mother passed away when she was only 16. She and her siblings somehow made it on their own in the city. She had family in the mafia who would give them money on occasion. Down the road, after she met Dario, her uncle asked Dario to work for him in the “family business.” He said no. Her uncle told him the only reason he would leave alive that day was because he was married to his niece. And just like that Dario changed the future generations of his family. It’s incredible to think that the decisions we make don’t only affect us, but our future family members as well. To his credit, I married an honest family man who knows right from wrong and acts accordingly.

Lina and Dario met at a dance when they were 21. They married a few years later and never looked back. Dario’s family took Lina in as their own and things began to look up from there. They moved to central Italy, looking for a new life with two young boys. Marcello remembers their house exactly the same throughout the last 32 years. Same furniture, same decorations, same beds. They didn’t change anything. Think about that. They haven’t had anything new in over three decades.

That struck me yesterday when Dario told me that the couch in their new house was very comfortable! In Italy they had a futon with a hard wooden back and arms. I bet that cushy new couch is pretty comfortable!

They have spent the last year saving every last cent they could. They have a heater that burns the little pellets for heat all winter. It only heats the downstairs. They rationed and planned out their food by sales and season. No new clothes. No eating out. No over-flushing the toilet or leaving all the lights on. No seeing their son or grandchildren to save travel costs. These strong people saved enough money for a fourth of our down payment and all the furniture in their new house! All that sacrifice and integrity seems to have come to a head right now. It has come to fruition and seen its reward. Yes, look at that same guy who only had a small sandwich to eat for the day now. Look at that girl who left the sauce on her mouth now. God has blessed them and life looks very different now. How it’s going so far

If you want a little peak of how it’s going here with all these changes and language barrier — and you need a good smile — check out my Instastories from Instagram:

14 thoughts on “Meet my Italian in-laws”