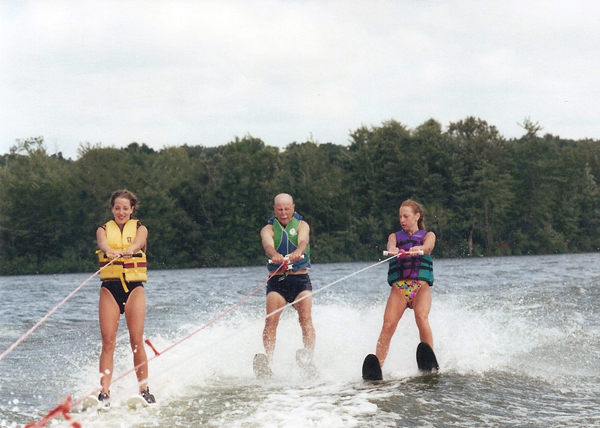 My grandpa, Don (my dad’s dad), passed away on Thursday. I think every single person who has ever met him would use the word gentleman to describe him. It’s impossible to try to convey the essence of a person in a short paragraph, but to me he was a strong oak tree of integrity and love. He golfed twice a week until right before he got sick at age 92. He shot an 88 and even made a birdie on his 92nd birthday! He dined out with friends every Friday night and played in a weekly bridge club. No one has a more social life than my grandparents did. I always loved that. I spent a lot of my summers at my grandparents’ lake cottage in Indiana. I had my own dresser and always felt at home and safe at their house. They took me to their cocktail parties and I felt included with my Shirley Temples (ginger ale and grenadine). Poppa taught my cousin, Liz, and I how to ski. We went with them to the country club dinners and pool. He tried to teach us as girls to skin a fish, but that didn’t work out, haha! So many of my childhood memories are wrapped around family and that lake cottage. My grandmother, his wife, died about 13 years ago and Poppa and I have spent every Thanksgiving together in Florida since. He always insisted on making the dinner with food from boxes and cans! (Decidedly oblivious to my disapproval.)

But last Thanksgiving was quite different. He was put on hospice care in his Florida condo and all three of his sons were staying with him for the holiday. He didn’t want visitors to see him like that, but I couldn’t help myself as I live only four hours away. We hugged for a long time and cried. I told him I’d see him in Heaven and to tell grandma hello for me.

My grandpa has had a heavy impact on my life and I’m so grateful. For the most part my Poppa taught me lessons by the way he lived his life, not by his words. Marcello says that he must have lived so long so that more generations could be influenced by his honorable character.

Here is an inadequate summary of a grandfather’s lessons to his granddaughter:

Grandpa was a doer, not a complainer. If he didn’t like the way something was or a situation, he tried to resolve it instead of endlessly talk about it. Now I’m not saying he wasn’t a talker! He could keep up with the best of ’em, but he wasn’t using his words to complain. How absolutely refreshing to be around someone who rarely speaks negatively.

Poppa did not sit around and discuss how people should be living their lives. He had his morals and opinions, but I rarely heard him comment on others’ decisions. It wasn’t because he didn’t care, but because he understood that life treats people differently and we have the freedom to go different directions and even make our own mistakes.

When you have that attitude, people confide in you, they don’t worry about receiving judgement or what you might say behind their back. They become their best self when they are with you, and actually probably end up wanting your approval most of all!

Be upright and self-controlled.

He had order and self control in his life. To a younger person this might sound like a boring attribute, but the older I get, the more admirable and desirable it becomes. There is an endless battle of areas we need to maintain control in our lives and it seems nearly impossible: alcohol, food, work, tv, sex, phones, shopping and other addictions.

To my knowledge my grandpa tended to be the master of these things instead of their slave.

Take care of what you have.

As a teenager my car was a mess of food and clothes and trash. Grandpa used very few words, but told me to take care of what is in my possession. He helped me clean it thoroughly inside and out. It was memorable and I kept a clean car for a long time — until kids that is.

But it carries over into other things. Take caring of things you have (house, appliances, electronics, tools, furniture, equipment) not only prolongs their use and saves money, but it also shows your appreciation for them. Poppa was not a consumer of the latest and greatest or concerned about luxury. He had a small cottage on a lake in Indiana and a small condo in Florida. I’m sure he could have upgraded if he wanted to, but he was happy with things as they were. He wasn’t forever looking for things he was missing, he enjoyed the things he had.

His 1989 boat still ran and he never upgraded. He had cars for decades. He wasn’t cheap. He would buy a new appliance or car when it was time, but only when it was time.

We had many conversations about debt. He was a firm believer in staying out of debt and paying cash for whatever he could during his life. I remember how proud of me he was when I paid off my first car. He believed it was best to live within your means and always experienced financial security because of it. Give when you are able.

He did not hold his possessions with a tight grip. He had found a balance of being content with what he had, yet not becoming miserly. He planned for the future financially, but wasn’t obsessed with it. He gave freely. This was a lesson he told me he learned from his grandparents, shown above.

He was never on time. He was 10 minutes early. He did not forget appointments or things he had agreed to. He didn’t cancel last minute or make excuses. He did what he said he would do. He was a man of his word. Be open to life and learning.

In his life, my grandfather never stopped evolving. I know his kids did not have the same experience as his seven grandchildren. I know that he changed his view on women’s roles. I saw change in him quite a bit in my own lifetime. Even in his 90s he did not say no to trying new music or food or shows or events. Maybe it’s just because he loved me so, but he didn’t dictate what was on the TV or comment when I made a different meal than he was used to.

He never remained stuck or stagnate, always moving forward until his final days. I hope I can remain open in my later years and keep learning and growing the way he did.

Be dedicated to your spouse.

My grandparents’ 58-year marriage was rare. I know they had their tough times. They both openly talked about it. My grandma told me that you just have to go through it, everyone has a rough patch, but you stick it out. This was before my time, because I have memories of my grandma sitting on my grandpa’s lap well into their 70s and laughing. They did life together, not separately. They met with friends, golfed, traveled, spent time with family. What a beautiful life and relationship they built together. When she became sick with pancreatic cancer he cared for her in a new way. He learned to cook and clean. He was her caregiver. It was precious, but it about broke his heart when she passed on. He didn’t talk much about it but his immense loss was visible and didn’t go away. And you just can’t handle seeing a man like him tear up. Cannot handle it. Oh, the delight and joy of their reunion in Heaven must be right now. I married a man very much like my grandfather. It was very clear to me when they both showed up to an event in the same outfit — same exact tie, jacket and khakis! And it’s even more evident as I type these lessons that Marcello lives by as well — better than I do. They’re even both wearing white polo shirts in this picture!

Side note: My grandpa asked me how to say “nice to meet you” in Italian before they met. I told him the word is piacere (pyah/TCHEHR/reh). “Got it!” he said. “P.R. cherry. Easy.” Ha! There are so many moments I wish I had captured in a photo. His arm around me at my other grandmother’s funeral. The time he taught me to drive the boat. The time in my childhood he came to find me when I left dinner in anger. The times when I was small that he let me dance on his feet. The time he drove hours to get me because my car broke down. All the times he picked me up on his way home from work to stay the night at the lake house and take me early to school the next day.

The honorable characteristics that Grandpa worked for and developed gave him a long and healthy life with beautiful relationships and much earned respect. He is proof that way you live your life is powerful.

I love you deeply, Poppa. I will do my best to pass your gifts to me on to future generations. 12 thoughts on “10 things my grandpa taught me”