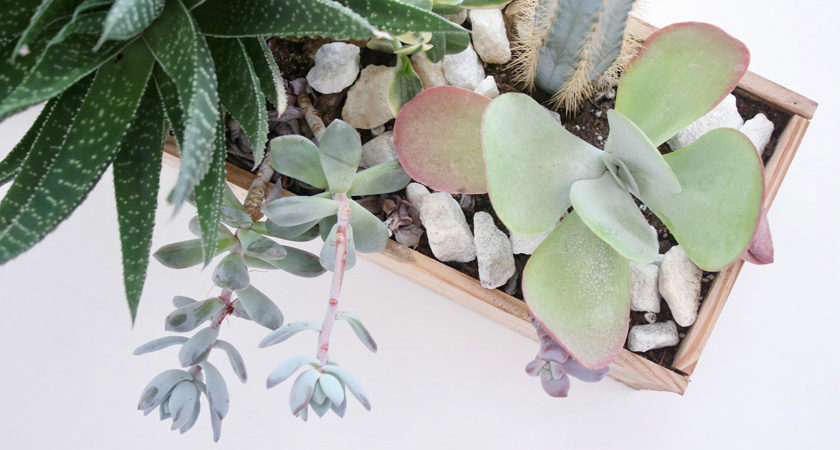 I updated our lanai with a fun Aztec rug, cushions and chaise lounges. I also added a plant to our succulent box that we’ve had for two years! Come on, I’ll give you a tour and show you how to make your own succulent box that drains properly. And trust me, if I didn’t kill it, you can do it too! Southern Florida is headed into it’s most anticipated season — winter. The squelching hot summer will finally relent and we will be able to open the windows and leave the house without breaking into a full on body sweat. Preparing for the milder weather and lots of time outside, I spruced up our lanai. (I never knew this term growing up in Indiana, but now that is apparently what I call my patio … I mean lanai.) I looked a long time to find a semi-funky, affordable, outdoor rug. I’m very pleased with this Aztec rug by Novogratz. I got the 8 x 10 and it was almost $200 with a 10 percent off coupon they send sometimes by email. That’s a lot to spend on an outdoor rug, but I couldn’t find another one that size for less than $130 — even super boring ones! I thought it was worth it to spend a little more and get something I was really excited about.

And my husband okayed a smidge of pink! I do all the hunting and buying for our house, but I always run larger things by him and he can veto. He doesn’t veto often, but he is 99 percent likely to veto anything with a flower or pink. And you know I made some cheapo placemat pillows for $5 a pop with some Ikat placemats! We’ve had this succulent box for two years now! This is exactly the way it looked after two years of neglect and poor watering habits. The plants on the side are what I bought to fill in that gap, though I only ended up using one. Some plants grew new sprouts, but several plants died (probably to make room for the faster-growing succulents … and at the hands of some little people). That cactus is out of control, right? When Marcello and I first did this project we paid $65, which I thought was a lot — especially since I have a brown thumb and thought they would die within the month. But I would say two years later, that is an excellent investment for a year-round outdoor centerpiece!

I didn’t pay attention to names or labels, I just grabbed succulents that I thought looked nice together and planted! I didn’t notice that any had a harder time than others, but obviously the ones that grow largest take up the most room and resources.

And by the way, we found a much better selection at our local nursery than the big box stores. So here is what we did to layer the box and allow for drainage. These naturally water-retaining plants do not like too much water, so drainage is very important, especially if the container has no holes.

This process has worked great for us and the centerpiece requires minimal care. We don’t water them on a regular basis, instead we look to see if the leaves become too thin. When the plants start to look like they’re drying out, we add minimal water. My experience is that they seem to prefer too dry rather than too wet.

Moving on, here is the rest of our lanai. We still have quite a few screens missing from the hurricane, but we’ll get around to it. There still a lot of price gouging going on. We converted the pool to saltwater a month ago and we really like it!

I’ve been bugging Marcello to buy new lounge chairs for two years now. We found these at Costco and they are much nicer than the $30 rusty ones we had for almost a decade! This is admittedly an oddly timed post as most of the United States is moving toward colder temperatures. It really bothers some people here to skip fall and winter all together and then other people love it. What is Christmas without snow and boots and fires in the fireplace? Weird. I will admit that it’s strange to be in shorts in December, and that the couple weeks headed into Christmas I long for flannel. And then I’m over it, haha!

What about you? I’m always curious if people prefer cold or hot. Which is your favorite? I AM DONE! This bathroom is FINALLY finished! I’

I found these pretty illustrations on freepik.com.

Whatcha think of the moulding I added to the walls

After focusing on projects for too many weeks, I h