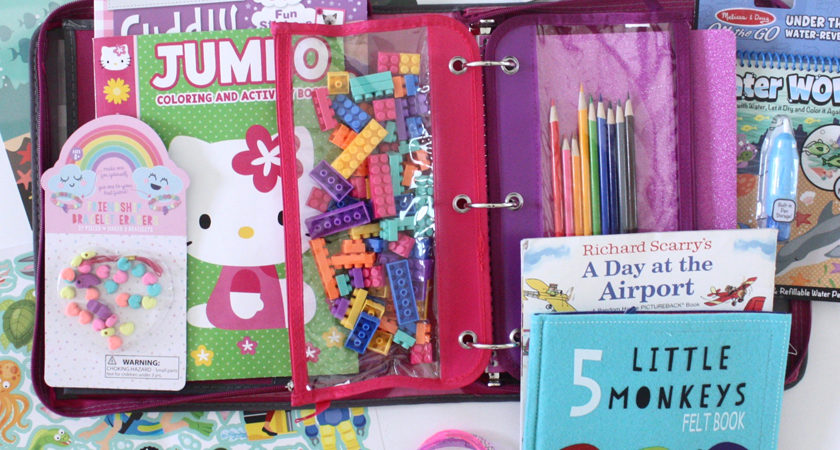 Do you have a kid who has a hard time sitting still or doesn’t like movies? Me too. I’ve got you covered for your plane ride. Here are all the specific activities and snacks I pack in our carry ons for my three wiggle worms, plus some tips so you don’t have to buy new goodies for every flight. Of course this will work for road trips too!

The boys (ages 5 and 6) have graduated to having their own bags with their activities and snacks on the plane. It’s made our life much easier as parents, not having to dole out different snacks and activities to each kid the whole plane ride. And they like being in charge of where they put things and when they eat what.

These binders are more for school age children, but I packed one for Clara (2 years old) as well so she wouldn’t feel left out. (Read: So she wouldn’t throw a giant fit of jealousy on the plane). They help keep things organized and in one spot instead of scattered in the plane seat and backpack pockets.

TIP: A trick of mine is to save half of our goodies for the return trip. I pack double the non-perishable snacks and put half in the suitcase for the return flight. I also put a different activity book and few other games aside for the return flight. During vacation, keep the airplane stuff in a separate bag in your suitcase and don’t tell the kids! This will cross one more thing off your list on departure day and also save some money.

I pack the kids’ backpacks for them for a couple reasons. One, they will put nonsense in them. And two, I don’t want them to loose their favorite toys. So I pack them with their own individual snacks, water bottle and activity binder. Sometimes I pack the exact same things for the boys to avoid squabbling. I bought these foldable backpacks for the kids that have cupholders on the sides for drinks and small toys. They are water resistant and fold down into the front pocket to 9×7 inches. I like that they take up very little space when not filled for traveling. They’re not a bad deal at $15, but not sturdy enough to use as an everyday school backpack.

Find a binder with pockets and a zipper. I bought this one because it comes in three colors and was the cheapest! It’s so handy to grab and go and keeps everything in one place.

So let’s get to what’s inside. The top half is from Amazon and the bottom half is from the Dollar Tree. I also found a few things in the Target dollar section to add in. I bought this Search and Find Activity Book because it has so many pages and can be used by kid who can’t read as well as those who can. It has the little icons of what to look for on the page instead of just the word like a lot of books. This is one they can grow into. I thought of the Water Wow water color pad as more a toddler or preschool activity, but my six and a half year old still loves it. Once it dries, they can do it all over again. I’m too cheap to spend $7 on a lego set with 5 pieces, but I did find this knock off set for $1 in the Target dollar section. Or you could put some you already have in the pencil case. I also found that Lego offers lots of instructions of simple things to build on their website if you wanted to print them out for the kids. My kids refuse to follow the directions, so I didn’t bother. Have you seen these before? Our pediatrician has one in her office and the kids love it. I saw that other clever parents have made their own Find It bottles with rice and trinkets so I did the same.

Security warning: We’ve been stopped by TSA because the rice bottles looked suspicious in the X-ray image. We were allowed to take them, but they pulled them to the side and swabbed them.

TIP: So I don’t have to spend a lot of money on activities for the plane every time we go somewhere, I simply keep all these things in a bag in my closet (on the highest shelf!) for our next flight. By that time they’ve forgotten about them and are excited to see them again!

And while I’m talking about the backpack and activities I might as well talk about snacks! I pack a lot of snacks. As I said before, I pack their own snacks and put them in their individual backpacks. I also pick things that don’t need to be refrigerated. See what food is permissible on the TSA site if you have questions.

I love these sectioned food containers. I bought them for school lunches, but we have used them all year. It keeps the fruit and sandwiches from getting squished in the backpacks after the boys have used them as pillows, weapons and punching bags.

These kids water bottles are my favorite when flying because they don’t leak and kids can’t spill them. Sometimes you can find them cheaper in a pack of three at Costco. Backpacks with cupholders on the side help with leakage and rolling away too. Gummies and lollipops are good for take off and landing, when little ears can be sensitive. I usually pack something like this:

TIP: Typically I tell the kids they can’t open their backpacks until we get to the airport or sometimes even onboard the plane. It’s a surprise! That way they are sure to be captivated for at least a little bit.

If you’re thinking, wow, this lady is serious about her kids’ carry on bags, you’re right! Haha! We’ve had quite a few disastrous flights and I’m not into having any repeats. See this story on what not to do for a laugh! Also, I’ve been home for four days in a row trying to potty train Clara so I’ve had lots of time on my hands. Creating multiple, unnecessary charts is actually my idea of fun.

Do you have any trips planned for the rest of the summer? Where are you going? At the beginning of the summer I created a set of 11 coloring pages to help kids memorize Bible verses over break. Since then, two little boys in my house have strongly suggested the need for a sticker chart. So to keep the motivation going, I designed a little sticker chart for their memorized verses. I thought I’d share it with you too! Get the coloring pages and sticker chart here.

10 thoughts on “Binder of activities for kids on the plane”