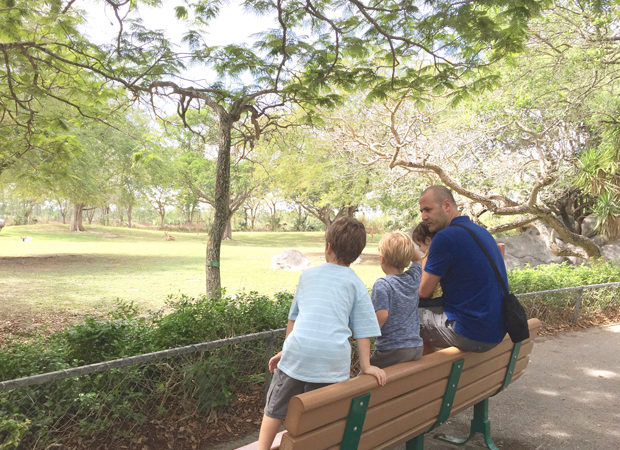 We have chosen to focus on experiences instead of presents for our kids’ birthdays. That means that the build up is for the trip of their choice, instead of gifts. We plan it, anticipate it and focus on that. In this post I’m also letting you in on why we do it this way, how much we spend and how I failed at packing for our last day trip!

The biggest reason we focus on doing something together is that we want our kids to have lots of rich experiences to remember and draw from. When they’re older they probably won’t remember what they unwrapped on their birthday, but they’ll remember the first time they pet a shark or fed a parrot sitting on their shoulder. These trips we’re taking as a family bond us together in amazing ways too!

Another reason we focus on memories has to do with our decision to limit toys. Our goal with less toys is to promote using their imaginations, to not value things and to have less clutter! For more on how I organize with kids see this post.

Because the child’s birthday will rarely fall on a day we can go on our trip, we also have cake and open their presents on their actual big day. A cake from a box, banners hung on the window and dance music playing loudly equals a party in this house!

If or when they start asking for birthday parties, we’ll use that money and turn the focus on planning a party instead of a trip. Last week we celebrated Luca’s birthday by going to the Miami zoo. He’s a bird lover, so I was searching for something we could do with birds, but didn’t find what I was looking for. I gave him three options and he chose the zoo for his birthday present. It turns out the Miami zoo has the third largest aviary in the world! They also offer parrot feedings and he was able to be inside cages with the birds. It was such a beautiful gift to him from God. How much did we spend?

To give you an idea of how much we spend on birthdays, we budgeted $200 for zoo tickets, gas, lunch, a snack and pizza for dinner. We could get away with this amount because the kids don’t eat that much yet so we could share lunches! But we’re about a millimeter away from being a two-pizza family though, which might not be such a bad thing since we can never agree on what kind to get. (Marcello, being the Italian that he is, likes the fancy thin kind with sparse cheese. The kids and I like thick, garlic crust with all the cheese that will fit on it!)

I also bought the zoo tickets online. Always search around to see if there’s a groupon or discount somewhere before I press that buy button. I found a package deal on a third party site for discounted tickets in addition to animal feedings and monorail tickets. I saved more than $50 by just googling “Miami zoo discount.”

In my experience, the best way to get the kids on board with the budget is to explain it in advance. Before we even got there I told the kids we had a budget and what it included. I explained we would have lunch and then an afternoon snack so they wouldn’t ask to stop at every vendor. I told them there would be a gift store and Mom and Dad weren’t buying things there today. If they want to spend their own money, they could. (They both bought lollipops with little tiger stuffies.) There were no meltdowns, like some of our past experiences, because I finally learned to let them know what to expect. By the way, I don’t tack on anything melodramatic like we can’t pay the bills or eat if we go over budget, I just tell them that we have one and that we want to be wise with our money.

So for presents, we spent about $75 this time. Luca will be turning six he has asked for Nerf gun darts and Playskool super hero figurines. In addition to these, I bought him a photo book of our day at the zoo (with a rewards coupon and only paid shipping and handling), kites for he and Adriano, basketball shorts and a little robotic swimming fish for the pool.

As they get older, the number of gifts will go down as they will inevitably get more expensive. They typically only get toys from us on Christmas and birthdays. Otherwise they can buy things with their chore money. Consider age when choosing a destination.

I’d like to very humbly offer a thought about parks and zoos and fun destinations for kids: Start small.

A two year old probably can’t appreciate Disney World. In fact, it might just overwhelm her. She’d probably be just as content with a local children’s museum or even an afternoon in nature at the park. You’ll save some money and not be disappointed when it doesn’t go as planned. Because does anything go as planned with a two year old?

Build up gradually. Now, I’ll be honest, a lot of the reason we started gradually is because we had the kids so close together that a lot of things weren’t an option for us. Where can you sanely and safely take three babies? But now we’re seeing the benefit of starting small with things.

This might sound extreme to some, but the boys haven’t been to a movie theater yet! (Neither one would sit through one at home, so I didn’t want to pay to go someplace where I would have to tell them to be quiet the whole time!) But now they’re old enough and Adriano wants to go to the theater for his next birthday. I absolutely cannot wait to see their faces when they see the big screen! And we’ll do it up right with candy and popcorn and ice cream afterward. I’m already praying the perfect movie for him will be playing. It makes it a special experience to go with their age and capabilities instead of pushing the fast forward button.

I’ve also noticed that because things happened this way, Luca and Adriano are more likely to explore the simple things in the zoo or museum that other kids might easily pass by. The boys played on the animal statues in the photo above for 25 minutes! If we give them more and more, they’ll need more and more to entertain and keep themselves occupied. If your children are widely spaced apart, I understand this changes things and makes this idea hard to adhere to.

Did I mention I’m very humble about saying this? Especially because we basically did it on accident! (That’s a typical family picture for us, above. Sorry about the poor quality of these iPhone photos.) I did not do a good job packing for this day trip. I didn’t take my camera and realized half way there that Clara didn’t even have shoes! Yeah. I think I’m so excited about the kids getting bigger and not needing fruit pouches and bottles and diaper bags that I am kind of winging things a little too much!

Next time I will consult one of my own handy, dandy travel with kids checklists! Shoot. How do you do birthdays? What are your traditions?

8 thoughts on “How we do birthdays with less gifts”