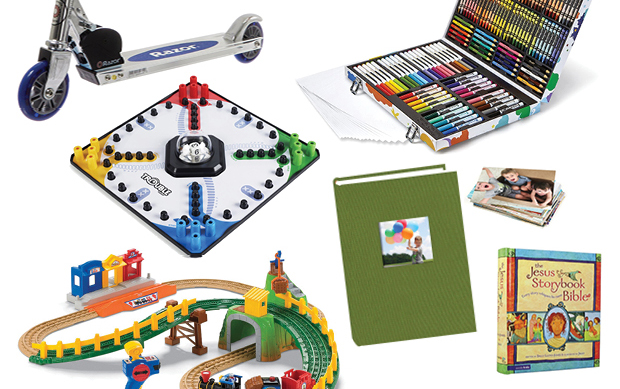 The past couple years I’ve been cutting way back on toys. I’m loving having less clutter and less to pick up! So if I’m going to buy them, they better be worth their while. These toys get my boys’ thumbs up, as well as mine: Legos are arguably the favorite toy of most boys. Recently the Star Wars Legos have been the most coveted by kids and adults alike, but there are also junior sets that are a bit easier — you know, in case you didn’t want to spend your afternoon constructing the Millennium Falcon.

My four and five year olds love stickers. They never tire of them. DK has a great series of ultimate sticker collections that have thousands of reusable stickers. Favorites subjects around here are Star Wars, Legos and dinosaurs.

Speaking of dinosaurs, they’re pretty popular at our house. The boys started watching Dino Dan and learning all the dinosaur names. Did you know some of them have changed since we were kids? I know. Anyway, Dino Dan (only $7 for 4 DVDs) is cute, innocent and will have him pronouncing “stygimoloch” and “euoplocephalus” in no time. You can also watch for free if you have Amazon Prime.

You could pair the dinosaur sticker book mentioned above or Dino Dan DVDs with dinosaur figurines. Sometimes the dollar store has larger dinosaur figurines — not as fancy as the Schleich model shown here, but still fun. Also, I’ve frequently seen a kids dino mask at the Dollar Tree to throw in too.

These scooters are well-priced ($30) and will serve him for a long time. Ten and eleven year olds still jet around on them in our neighborhood. Don’t forget the helmet! (Pictured above: R2D2)

I bought photo albums for the boys last Christmas and gave them photos to put in the slots. They had so much fun putting them in and recounting the memories we captured. They both still look at them. I’ll have to print some more this Christmas to carry on our tradition.

I’ve been waiting for the day the boys could play games! Finally, they are ready for a few simple board games. In fact, we’ve started a Friday Family Pizza Game Night. We have heckling and silliness, but overall it’s bonding and teaches them how to be a gracious winner or loser. Usually. Ok, sometimes.

Our favorites are the classic Candyland and Trouble, but also a new one I discovered at the kids consignment shop — Cat in the Hat I Can Do That! It’s not the average game in a box. Can you slide under the trick-a-ma-stick with the cake under your arm? I can’t either.

It took awhile for my boys to want to sit still long enough to color and create, but at this age attention spans are growing and those blobs on paper are becoming recognizable! I’m excited to buy these art sets for them for Christmas this year. They’ve been eying them for awhile.

One of my favorite toys for kids are costumes. They transport them to another world and use their imaginations. At this age, super heroes reign supreme. You can’t go wrong with a costume as a gift! Spiderman and Batman are always popular if you can’t decide. And might I suggest the costumes with puffy muscles. It is SO funny to them act big and strong with them on and they think they’re great!

The sets ($15-20) with multiple masks and capes work great when there multiple children too.

My parents got the boys a Fisher Price train set for Christmas and it has been a hit ever since. It reminds me of mine when I was a kid! And I love this this one with an aweome jump and whirling feature.

I’m a big fan of the Jesus Storybook Bible. It tells Bible stories in a way kids can understand, but not overly simplified. And it brings every single story back to Jesus. My boys’ favorite story in this book is David and Goliath, mainly because Goliath tells David he’ll eat him for breakfast. They think that’s pretty great. The Bible isn’t full of sweet little stories — there is war and mistakes and adventure. This children’s Bible doesn’t skip over these things and keeps the interest of little boys.

This post contains affiliate links. Thanks for supporting this blog!