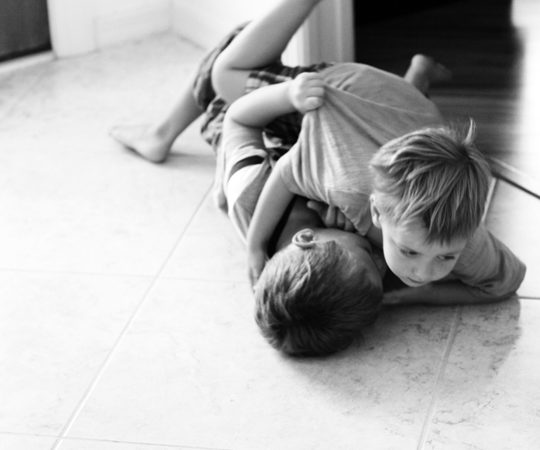 The boys are three and five years old. I have shown them love with my whole heart during their short time on this earth, but I’ve also let them rule my emotions. I have let them get the better of my temper, lost control, yelled and acted like a child myself more times than I can count. But something has changed.

A couple months ago I felt a gentle rebuke from the Lord, telling me this is not the way. Luca started yelling too, and I saw that if we continued down this path his teenage years would be tumultuous and ugly. Then one day I got an email from someone dear to me and of great faith (who had no knowledge of my conviction) giving me some simple parenting advice.

She said, “Try not to ever raise your voice at them and gently tell them ‘no’ and stick to your guns.”

This was the final confirmation I needed to commit myself to changing. Marcello was completely on board with adopting a new game plan. He too could see we were headed down the wrong path. We were in a lazy groove, in a pattern of giving in to the boys after they asked enough times. And when we finally gave in, we did it with a tone and an eye roll. They saw that asking over and over again got results. And so did temper tantrums. When a tired parent can’t take anymore, it’s easier in the moment to just give in. Or sometimes snap and then make a more severe consequence than necessary. We were not in control of them or us. We had to turn this car around!

I am clearly not a parenting expert. In fact, if you had seen me in action when the boys were two and three, you wouldn’t have even read this far! But I am growing, and God is showing me the way. These are four things that have pushed me into a new experience in parenting — one where I am in control of myself and the situation. Hallelujah! My transformation started with a prayer. I knelt down in my room and prayed something like this: Lord, I’m sorry for the way I’ve behaved toward my children. Please forgive me. I know they are gifts from you and I am grateful you chose me to be their mother. Teach me your way. Lend me your wisdom to be the mother they need. Change my heart and give me patience. In Jesus’ name, Amen.

As you may know, praying for patience could be risky business because it might mean God will teach you to be patient! In other words, you might have to endure some trials in order to grow. I didn’t care, I wanted to grow no matter the cost, for my children’s sake. Fortunately this time was different. He changed me supernaturally, overnight. I didn’t have to go on a journey or bury my nose in self help books. This has only happened to me two times before — experiencing an answer to prayer almost immediately — and it felt miraculous.

I tell you the next day was different, very different. And it hasn’t been the same since. God hears our hearts and honors obedience. I see that when one son is at his worst, and instinctually I want to separate myself from him, the best thing to do is lean in. When he’s freaking out over and over about nonsense, I started asking him what is wrong in a calm voice. I make him feel heard. I give him a hug. I try to make him feel understood and connected. It’s truly not easy to do, but if I can fight my instinct to shout at him or throw out a threat, I reach deeper and sometimes he changes his attitude for the rest of the day.

One day he was upset about this and that and carrying on. My gut reaction was to send him to his room, which obviously has its place, but in this case something inside told me to give him a hug. He calmed down immediately and smiled.

This a great tool to have in your back pocket when your child is having a continuous meltdown day. Ask what they’re grateful for

When I hear grumbling and complaining, now I say “tell me three things you’re happy for.” I hold up my fingers — one, two, three — as the child makes his list. And every time I get a little sliver of a smile by the end. You’ll be amazed at how this little question can shift the entire family’s mood!

Studies show that your brain only has so much power to focus its attention. It cannot easily focus on both positive and negative stimuli. It actually alters your brain activity and triggers dopamine. It always amazes me how doing what the Bible tells us will result in physiological benefits for our bodies. And it will work for parents too! Being grateful has been shown to reduce anxiety and depression, as well as lead to better sleep. Stick to your guns

This is the hardest one. The phrase that kept coming to my mind was “less yelling and more consequences.” Essentially we needed a whole lot less arguing and negotiating, and a lot more sticking to our guns so our kids would listen the first time.

To get to the place where your kids know you are true to your word takes some work. In our house it looked like this one horrendous week:

By the end of the week they were seeing me as a woman of my word. I wasn’t repeating myself over and over. One thing Marcello and I realized, though, is that we need to think through consequences before we say them. Is it something we will really follow through with? Is it fair for the disobedient action? I’m home with them every day so I adapted to this quickly. I had to give Marcello grace, because even though he was willing to change, it took a little bit longer.

No discipline is enjoyable while it is happening—it’s painful! But afterward there will be a peaceful harvest of right living for those who are trained in this way. — Hebrews 12:11 These four things have given me back some control. A mom in control doesn’t need to yell. She doesn’t need to threaten. She demonstrates ample amounts of love to her children and does well by them as she disciplines. They even respect her for it.

As I mentioned before, if you have two and three year olds, take this post with a grain of salt and bank it for the future. I’m still not sure what one is supposed to do with two year olds, especially multiples that young! I’ll say a prayer for you ;)

No, I don’t claim to have this all figured out — far from it — but we are headed in a different direction now with the Lord’s help. We’re experiencing big changes: a calmer house, kids who feel heard and loved, and parents who feel respected. It’s a good cycle. There will be many obstacles along the way and I’m beginning to see those as opportunities to learn, grow and become better.

Is there any one time in your parenting life that has changed you? A valuable lesson you care to share? I’d love to hear it!

If love were just an emotion, then God couldn’t command it. But love is something you do. It can produce emotion, but love is an action. The Bible says, “Let’s not merely say that we love each other; let us show the truth by our actions.” — 1 John 3:18

9 thoughts on “The week I changed the way I parent”