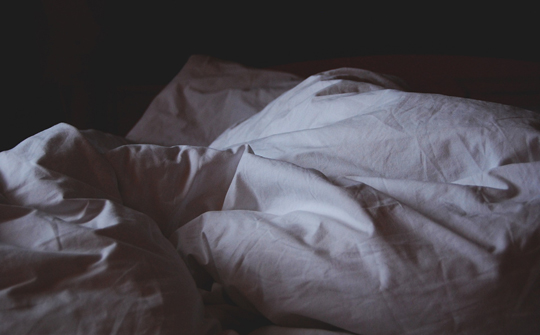 I used to have a lot of nightmares. Truly terrifying scenarios and stories would invent themselves in my mind while I was sleeping — sometimes on a nightly basis. “What is wrong with me?” I wondered. “Is there something dark inside of me?” I was a grown adult who was, at times, scared of the dark. It wasn’t normal and troubled me deeply. I am a believer in Christ, what gave Satan the right to torment my sleep this way? The answer was me. I handed him the authority he needed. I let him have a foothold in my life by watching things of his kingdom instead of my Father’s.

It took time to understand and even more time to rectify it, but God showed me that I was watching shows and movies I should not have been watching.

Disturbing clips of gore and hate and sex were too much for the creative, impressionable mind God gave me. It couldn’t process or forget the unnatural images that became embedded in it. I understood they were not real, but my mind was forced to process them all the same. This is what caused my nightmares.

Can you imagine if you sat a person down from the 1800s and had them watch a current horror movie? It’s safe to say she would be terrified. We might be hardened against seeing some gruesome things, but it’s not natural to be exposed to murder and violence on a daily basis — whether it’s TV or even ’round the clock news.

If you’re a woman, PTSD United says you’re twice as likely to develop post traumatic stress disorder as a man. I don’t know that TV will give you PTSD, but there is a strong probability that women are also twice as likely to be affected by disturbing content on screen than men. Over half of movies made today are rated R — 55 percent. And along with foul language and violence, are the sex scenes. As you know, sex scenes in movies now are basically pornography. Nothing is left to the imagination.

So what does this do to marriage? After you watch a movie with an explicit love scene, how to you feel toward your spouse? Real people can’t compete with body doubles and lighting and scripts and practiced camera angles.

Worse, what if you were married to one of the actors? What about Ben Affleck in “Gone Girl”? There are scenes with two different women. My heart sank for his wife and I prayed for them. How can a marriage survive that, on film forever?

It wasn’t meant to be like this. God intended sex as a beautiful, intimate act to be shared in marriage. Not casually. Not to be watched in group settings. I’m going to say something crazy by the world’s standards: We should not watch these sex scenes — with or without a spouse.

I know this is not light reading like I usually write. This is not something I particularly like talking about, but acknowledging it and making steps to guard my family has changed my life — especially my sleep! Guarding my heart and mind has almost completely eliminated my nightmares. I even have fun, silly, light-hearted dreams now! Some people are not as affected by graphic images as I am. But if you are a sensitive soul or find yourself having nightmares, guard your mind. Protect yourself and your family because it doesn’t have to be this way.

Do you have nightmares? Do movies affect you the way they affect me?

Above all else, guard your heart, for everything you do flows from it.
— Proverbs 4:23

3 thoughts on “How to stop nightmares”