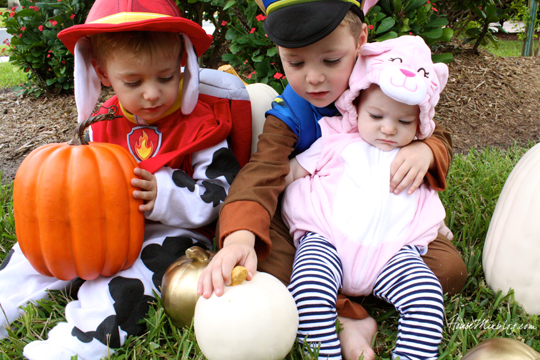 I like Halloween, but we have a strained relationship. There are things I love about this holiday: Kids running around in all sorts of costumes and silly hats, eating my kids’ candy when they’re asleep, visiting the pumpkin patch.

We watch most of our TV on Hulu and they usually play the same commercial through the entire show, so last night that meant every commercial break began with a chainsaw! Ahhh! I’m such a baby, and I’m not ashamed to tell you that I either turn off the TV during the break or mute it and put my face in a pillow. My husband doesn’t even think it’s weird anymore.

So I stay on the fun side of this holiday! Like fall decor, costumes and sweets. Yeah, that’s more my idea of Halloween. I don’t have much of a fall seasonal decor stockpile yet. I picked up several plastic pumpkins at Target that were marked down to 70 percent the day after Halloween. I liked these small ones in white but there was only one left. So I grabbed a few black ones and spray painted them gold. Because everything is better painted gold. I used another pumpkin in my table centerpiece and put it in a wooden box with these rustic balls (Ross Dress for Less) and berry garland. But this is my boys’ idea of fall decorating, done with chalk markers (gifted by Chalkola*).

My friend Ashby’s son, Trooper, and Luca have been the same thing for Halloween since they were born, but this year we thought they could just choose something they already have. That was until her awesome sister-in-law sent Trooper a Chase Paw Patrol costume exactly like Luca’s!

It was completely random and she had no idea that they have been the same thing every year or that Luca already planned on wearing that exact costume. What are the chances?!

Here’s a look at their costumes together through the years: I have this vision of these guys being 25 and Ashby and I will still be trying to dress them alike for Halloween.

One more Halloween thought and then I promise I’ll end this not exactly cohesive post.

Ashby filled me in on an article she read about why Halloween is the official start of cold and flu season, and it is fascinating. The gist is this: While we’re all gorging ourselves on literal buckets of candy, we’re decimating our immune systems. Cooler weather and a classroom of kids with lowered immune systems equals colds for everyone.

I did some more digging on the subject and found that 1 teaspoon of sugar can shut down your immune system for up to five hours. And kids should only get about 3 teaspoons (12 grams) or less of sugar a day — um that’s one fun size Skittles packet!

Sorry to be a Halloween party pooper, but we just got past a week of nasty colds at our house and I am not up for doing it again next week. My game plan is to feed the kids a healthy dinner before we go trick or treating and make up a candy allowance and share it with the kids in advance. I’m also going to cheat by using this easy, healthier sweet treat: The boys love spoons of natural peanut butter with a few chocolate chips on top. They’re happy and it’s loads better than processed candy. Thought I would share it in case it helps you too! That’s about all the fall that’s going on around here. I’ll work on it for next year, because in Florida you have to make your own fall. It’s 85 degrees today!

Do you have any fall or Halloween traditions? What are your little people going to be this year?

*If you want to try chalk markers, here’s a 20 percent off coupon code: CHALK20A