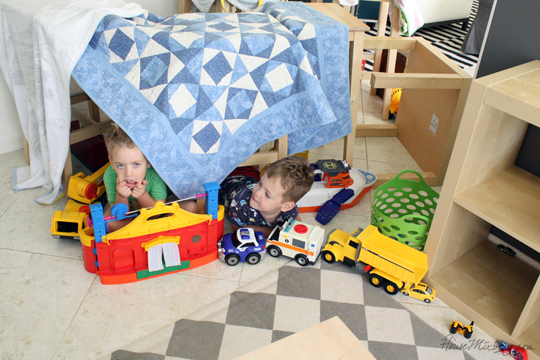 It has gotten out of control around here the past few weeks. It started when Luca had a tonsillectomy and the two weeks of recovery were intense.

We babied him and took the doctor’s advice, giving him ice cream and juice, anything to keep him from getting dehydrated. His throat hurt so badly he refused everything at first. At one point I was offering him a sticker for every sip he would take.

As he healed, Luca couldn’t understand why he could no longer eat ice cream all day and threw a million fits because he was tired and sore on top of his already spirited nature.

Adriano was literally running in circles because he had eaten so much sugar. We tried to minimize his sweets and say no sometimes, but you can’t very well serve one child juice popsicles all day and not give one to his brother.

What we had was a (very messy) household of over-sugared, sleep-deprived, TV-addicted, isolated people with too much yelling. Not good.

Marcello emerged as the star parent. I had resorted to crying in the bathroom, but he had learned a valuable thing through all of this. Something must have clicked for him because overnight he became a balance of love and tough discipline to our son. When Luca went primal, Marcello stayed calm, tried to understand why he was upset, explained what the consequence would be if he didn’t comply and followed through. He even hugged him at the end. Wow. I was in the corner taking notes.

When he was well enough, Luca started going back to preschool. We were weary from our battle, but we weren’t quite done. He brought home a nasty virus from school that made its rounds with each of us. Even poor baby Clara caught it and now has chesty cough and plugged up nose that breaks my heart. I’m not exaggerating when I say each child needs something at every single second.

And then Marcello left for several days on business. This was the deal breaker.

I barely have this operation under control when there are two parents, everyone has slept and is healthy. You can imagine how I look now. Crazy. The answer is crazy.

When these situations of sleep-deprived chaos creep up, I find myself angry at God. I tell Him things like it’s too much and ask why He refuses to help me. What would it hurt to just send an angel to kiss my baby to sleep at three in the morning?

And that’s ok. He’s God. He can take anger. And He wants us to be genuine with Him; He knows our thoughts anyway. But at some point I need to mature and move past this point.

If my kids are all sick and waking every hour of the night does that mean God doesn’t care? Not even close. He cares deeply; in fact, he has recorded each tear in His book (Psalm 56:8). What He wants is for me to draw near to Him.

And when I do come to Him in times of need — with an open and teachable heart — I have the most amazing spiritual growth spurts. And growing is leagues better than being bratty and angry.

So what does it look like, drawing near to God when your tired and frazzled? Right now, at this point in my walk with Him:

If I’m more intentional with my time in these ways, I see themes emerge. I hear the same thing in a sermon, from a friend, in a song. I am more aware of His presence and what He is trying to teach me.

The other night I was lying in bed, feeling overwhelmed, and my chest began to tighten with anxiety of another sleepless night and the agenda for the next day. I prayed like a begging child for God to help me.

Then a new tactic snapped into my brain: Instead of focusing on the bad, list the things for which you are grateful.

When I stop feeling sorry for myself and slow down to listen and be grateful, I see that He has been helping me all along. He just doesn’t answer my prayers when and how I think He should. One specific way He answered my prayers was sending my parents. They didn’t even know Marcello was leaving or the extended madness going on here, but their visit coincided perfectly with his trip.

Don’t be confused and think that good things are coincidence, because they are not. All good and perfect things are gifts from from the Lord (James 1:17). And I must give thanks because there are a lot of good things.

I have learned a lot in the past few weeks, but I’m looking forward to a reprieve. Have you had times like this when you didn’t know up from down?

10 thoughts on “Things have spiraled”