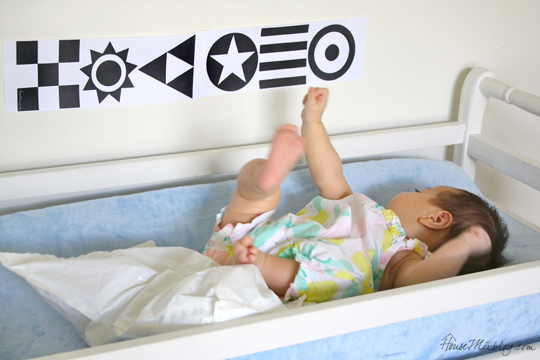 All three of my kids as newborns enjoyed staring at bold black and white images on the changing table while kicking a sealed plastic bag. That doesn’t sound like a blast to you? Me either, but it seems like the epitome of fun to newborns!

Why black and white images are stimulating and good for your baby: An empty wipe bag with a burp rag and a little air sealed inside works perfectly as a kicking bag. It’s good exercise too! Of course, don’t leave baby alone on the table, but you might want to bring a book because she might be there awhile. Mine loved it so much it could even be overstimulating to them. Here is the printable. I cut mine in half down the center and taped it up in one long strip. So I already knew about black and white images and discovered the plastic bag exercise, but I’ve learned a few new things with this baby girl that I didn’t know with the boys. Maybe one of these can help you too!

How in the world did I not know about infant probiotics? At Clara’s one-month check up, I mentioned the to the pediatrician that she was frequently fussy and her stomach seemed to bother her. The doctor told me to try probiotics and said that it’s been the only remedy proven to help colicky babies.

And do you know that after two days of giving the probiotics to Clara, I started to see a difference! She started cooing and working on her toothless smile instead of grunting and trying to get comfortable.

Now, I should mention that Clara was only mildly fussy. She was not colicky or spitting up frequently. But I could scream at our old pediatrician who never once mentioned infant probiotics. Both the boys were difficult babies. One had dairy allergies and one had acid reflux, among other things. I would have been very grateful for something that helped, even just a little bit!

I bought this kind, which I mix with the tiniest amount of water and give it to her in a syringe. I also tried this kind after the pediatrician gave me a coupon. Our awesome new pediatrician also told me that Clara’s baby acne was actually cradle cap that had moved to her face, and even her ears! Poor baby. She told me to use Selson Blue shampoo in her hair and on her face and it would clear up.

This blue stuff seemed like the opposite of anything I would want to put on my newborn, but I went ahead and ignored the ingredient list and tried it (keeping it out of her eyes and rinsing thoroughly). Her skin was 80 percent better in two days. (This pic was taken a couple weeks later.)

It turned out she had three different types of acne/craddle cap/I don’t know what else happening on her sweet little face that the doctor identified, so definitely ask your pediatrician before trying it.

You know that dreaded noise of the pacifier clanking on the ground? And then you pick it up, stick it in your own mouth to “clean” it off? Well, I actually did that in front of the doctor. Haha. There was no sink in the room, so I just went for it.

She smiled and told me that it is actually good for the baby! It turns out putting baby’s paci in your mouth actually helps them build their own immunity. I looked into it a little bit more, and according to this New York Times article, “The findings add to growing evidence that some degree of exposure to germs at an early age benefits children, and that microbial deprivation might backfire, preventing the immune system from developing a tolerance to trivial threats.”

Did you already know this? I sure didn’t and was quite happy to hear it. Of course, I told her that I already knew that and that’s why I did it in the first place.

As you may have heard, some women drink red raspberry leaf tea to help “tone” their uterus for birth. There are many claims that the tea has shortened labor time and reduced pain. I don’t have a personal account of this because I was too scared to try it after my history of short labors, but I do, however, have a personal account of the tea’s benefits after delivery.

During my extended, frustrating postpartum recovery, I tried red raspberry leaf tea to shrink my uterus. My uterus stayed larger than normal due to a small piece of retained placenta. I still looked pregnant when those stupid websites were telling me that my uterus should be the size of pear. I had to get a D&E (dialation and evacuation) but I think the tea really did help, especially after the surgery. But the real benefit I noticed was the boost in my milk supply.

I stopped drinking the tea for two days and noticed a dip in my supply, and when I started drinking it again, it increased! I was pretty darn excited about this because I really don’t care for the fennel taste of Mother’s Milk tea. The raspberry leaf tea has a mild taste, more similar to regular black tea. I’m a bit picky about tea, and even I can drink this plain if it’s iced. If I’m taking it hot, I like a tablespoon of honey for good measure.

While I was recovering or when my milk supply dipped, I drank four cups a day. I also plan on continuing in the future during menstrual cycles to ease cramps and reduce flow.

I didn’t find the tea at the grocery store, but I did find it on the bottom shelf of the tea/coffee aisle in Target. I also ordered these boxes online. Maybe next time I’ll try loose tea. Also, if you try it, make sure you get the raspberry leaf tea, not just raspberry tea.

Did pregnancy do weird things to your body? After these three pregnancies my feet grew almost a full size, my eye sight got worse each time (which my eye doctor says is common), and after baby girl, my hair seems to be coming in straighter! Wacky hormones.

Have you made any infant discoveries recently that I need to know about?

This post contains Amazon affiliate links. This costs nothing extra to customers, and I earn only a tiny percentage. I do personally use these products, and all of the opinions expressed are my own. Thanks for supporting this blog!

6 thoughts on “Newborn pattern printable and some infant tricks”