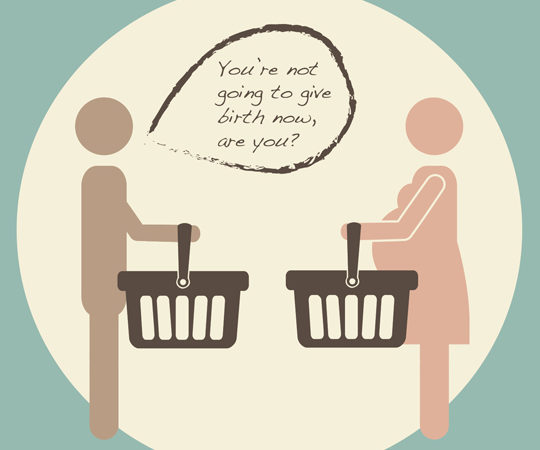 I don’t really mind strangers commenting on my pregnancy, telling me they have X number of children or grandchildren. I don’t care if they would like to know the sex or ask how old my two boys are. In fact, most people only offer a nice smile, but it seems there are a few people who could use a little pregnant lady etiquette.

I’ll admit I get rather large in the last trimester. I’m not all that tall and my torso is not all that long, so where else does baby have to go but out? Here are some comments I’ve gotten from complete strangers to help remind me just how large I am:

That’s quite a belly you have.
— Cashier

When are you going to pop?
— Man waiting behind me in line

You’re not going to give birth now, are you?
— Mechanic

Oh my.
— Woman passing by me, not trying to whisper at all

I left your car out front. You know, just in case.
— Valet (I was barely 7 months pregnant)

When I gave birth, I popped a bunch of blood vessels in both eyes. My labor was two entire days.
— Lady at a bridal shower

Is this your last one?
— Cashier, as my 2- and 3-year-old boys were yelling and climbing in and out of their double stroller

Hopefully that one’s a girl.
— Woman passing me with her cart, nodding toward my belly, as my boys wrestle in the cart

So how much weight have you gained?
— Cashier, to my friend Michelle (She was so caught off guard she actually answered the cashier. Then finally as she walked out, she thought what the heck!)

What to say to a pregnant woman

Those comments were’t so nice, but the one comment that stands out the most was of a different nature. As I was getting into my car at the end of my second pregnancy, a woman yelled from across the parking lot “You look beautiful!” She had no idea what that meant to this swollen, cankle-sporting, uncomfortable mama.

Every woman in her eighth month of pregnancy should be told by a stranger that she looks beautiful, because she is. I keep that in mind when I see a woman nearing the end her pregnancy and try to pay the compliment forward.

It seems some people confuse a big bump with an invitation to say whatever “pops” into mind. What sort of comments have you been given in the last trimester?