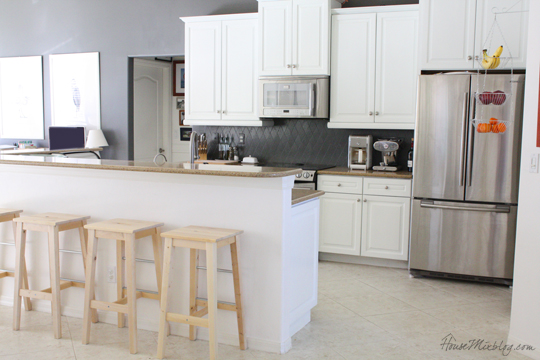 I’m beginning to get a little bit more into cooking lately (I never thought those words would ever come out of my mouth), and spending more time in the kitchen has made me want to do a bit of organizing. Here’s what I’ve been up to: We have this great bar area around our island, but we only had two beat up stools. So everyone ended up standing around the bar instead of sitting. A year later I finally got some seating in there!

I looked at a variety of stools before I settled on these BOSSE bar stools from Ikea. Because I wanted six bar stools (four in the front and two on the side), I thought seats with backs would look too busy. I decided clean, simple lines would be best with so many side by side. And these stools are half the price of my previous favorites at $50! I added a fruit basket ($10) on the wall with a plant bracket ($6). Before, we were piling all the fruit on top of each other in a bowl on the counter. The bananas usually got squished and we couldn’t see the rotting avocado on the bottom. I’ve also read that certain fruit (bananas, for one) make other fruit ripen faster. So this works great! It also frees up some counter space. Speaking of counter space, I also organized the countertop by adding this bread box ($20). I stole Ashby’s idea and use it to hide my bottles of vitamins I always end up leaving sit out. I bought several of these large containers ($1) from the Dollar Tree for flours and sugars. Before I found them, I had some packages piled together in a big tupperware piece and others left out with only a clip at the top. This works (and looks) much better. One morning, when Marcello went to pick Adriano up from his crib, he walked through a big puddle of water on our kitchen floor. Our water filter had been leaking all night. (Isn’t it crazy how fast random things can go wrong in a house?!)

After we stopped the water, cleaned up, and dried the cabinet, it seemed like a good opportunity to organize. Everything was already out, so I sorted it and got rid of things that should have been in the garage or had been put back with only a tiny amount left. I only kept what would fit in my caddy. I put down some pretty shelf liner. (Actually I think it’s wallpaper. My mom had it left from something and handed it down to me.) I also screwed in clips for my gloves so they don’t dry crumpled and stuck together in the bottom of my caddy like they did before. We’ve had this kids’ picnic table ($70) for about six months now, and we love it so much that I thought it was worth mentioning.

Last summer at my parents’ house, my mom pulled out my brother’s old picnic table for the boys to use. I noticed the little one could sit down by himself, without needing help getting the chair pulled up and situated. I was wishing I had bought a picnic table instead of table and chairs for our house!

The problem with cute little chairs around here is that my boys are always using them for things they’re not supposed to, like standing on them as stools or using them as weapons. They even end up in different rooms. The picnic table solves these problems. And what’s great about this one is that it folds down flat for storage. Most of the picnic tables for sale do not fold flat and come in bold colors. I also chose this one because of it’s white color and classic style. It blends in with the rest of the house, which is a good thing, because there it sits every day in the middle of our most lived in space!

It has held up to food, paint, crayons, and play-doh so far. The boys truly use it every day and it gets a thumbs up from me. That’s what I’ve been organizing lately. Have you been tackling any organization projects lately yourself?

To see inside my cupboards and how I organize the rest of my kitchen see this post. This post contains affiliate links. This costs nothing extra to customers, and I earn only a tiny percentage. I do personally use these products, and all of the opinions expressed are my own. Thanks for supporting this blog!

5 thoughts on “Organizing around the kitchen”