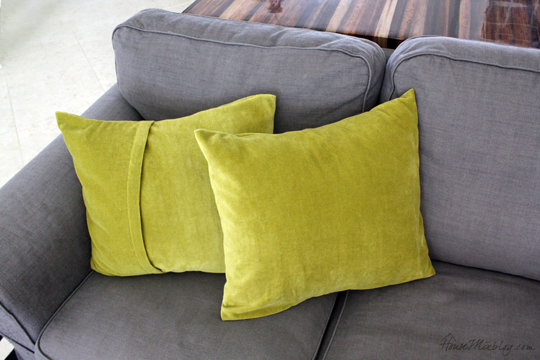 Here’s an easy tutorial on how to make envelope pillow covers. I used a curtain, which worked great because the fabric was cheaper than buying it by the yard, and I could use the existing hem (which looks much more professional than mine, by the way). I’ve been debating what to do with two identical couches that face each other in my living room. I love the eclectic look of different textures and patterns stacked together in magazines, but I know with two boys they will never stay like that. In fact, with two couches it would probably end up looking too busy.

Instead, I think we need comfortable, usable, simple pillows that match. I decided four would be a good number and after pricing some pillows online (why are pillows so darn expensive?), I decided I would be making my own! One day at random I spotted this lone green velvet curtain panel in a clearance bin at World Market. It was marked down to $8. That works! I swiped pillows from the boys’ beds that were large enough and full enough. The curtain panel was just big enough to cover all four. Whew.

Here are the details in case it helps: The curtain panel I bought is 54″w x 84″h. My pillows are 20″x20″. After I cut off the end seams off of the curtain, I was left with a little over 75″, which I divided into four 19″ sections. So I cheated my pillows by an inch all the way around, but I like them a little fuller anyway.

Here’s how I made the pillow covers:

It took me an hour and a half to complete (with interruptions from munchkins).

It’s so easy I feel like I’m over explaining it! I’m no seamstress (I can only sew straight lines) and I had no problems. Anyway, I’m happy with my new envelope pillow covers — and especially pleased that they only cost me $8. This is definitely a project I will repeat in the future.