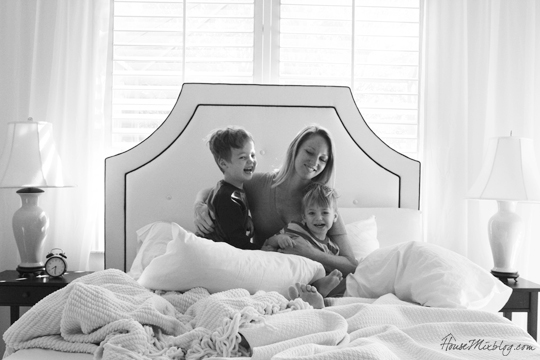 As my morning sickness is subsiding and I’m beginning to feel like a real person (as apposed to my previous irritable zombie self), I’ve started to venture out of the house again. It feels so nice after many weeks of only leaving out of necessity. I was beginning to see my house as a cage, associating it with never-ending nausea.

But now that I’m making my way out of the house, I kind of want to go back in it — for a different reason. My boys, 2 and 3, are both acting completely out of sorts in public. (Think wrestling each other in the doctor’s office while she is trying to talk to me or one continually trying to poke the other in eye in the shopping cart.) I’m used to one or the other fussing or crying, but now they’re both at hard ages at the same time.

On top of it, as I am pregnant with my third baby, my body wasted no time showing the world. I can only imagine what people are thinking as they stare at the spectacle that we are everywhere we go. When we leave the grocery store and I have my three year old sternly gripped by the upper arm, my two year hoisted up over my shoulder (kicking and screaming because he doesn’t want to hold hands in the parking lot), I imagine I look like a woman who has lost all control. I imagine they’re wondering why in the world I’m having a third baby when I can’t manage my first two.

Why did my husband and I have our kids so close together? Well, it took a long time for me to get pregnant with our first, thanks to PCOS (Polycystic Ovarian Syndrome). After a year and a half, we went to a endocrinologist who diagnosed me and put me a low dose of medication. I eventually got pregnant. After struggling to have our first baby boy, we didn’t wait to try for the second — of course, never thinking I’d actually get pregnant right away.

When Luca was eight months old, I found out I was pregnant. We were elated! I was so grateful I didn’t have to go through the emotional roller coaster of testing and charting and waiting two weeks, only to start over again. Little did we know what we were getting into.

My intention on this blog is to be transparent and real. It would be easy, probably even self-glorifying, if I just posted some nice pictures of the three of us and said everything was lovely. And it would be a lie.

It’s seriously intense having kids 16 months apart. The firstborn can’t be your “little helper” or independent enough to do much on his own because he’s still a baby himself. When one’s progressed past a  stage (sleep training, bottles, pacifiers, potty training, you name it), the next is just entering into it so you get to do it all over again, back to back. Sure, they play together and entertain each other — but they fight and irritate each other an equal amount of time.

Now’s the part where I round that last paragraph off with a lovely sentiment about how it’s still rewarding or fulfilling or … something, but I’m not there yet. I’m at the beginning of this journey and couldn’t possibly reflect with much validity. As for the people in the grocery store, I find myself wanting to explain. That I actually do discipline my children. That it won’t always look like this. That they won’t always be demanding two and three year olds. That I’m 35 (not a spring chicken in the fertility world — I have “advanced maternal age” in my folder at the OBGYN!) and if we’re going to have one more baby, we might as well do it now. And that I just can’t shake the feeling that there’s someone who’s supposed to be in our family who’s not here yet.

Despite my parenting failures (and others’ thoughts), I feel God’s hand on me. For example, I was feeling sick one afternoon and overwhelmed by the boys. I went to my room to cry and my husband followed me with words of encouragement. He was interrupted by a knock at the door. He came back in the room with a bouquet of white roses from our neighbors, just because I’m a good mother, they said. Can you believe that? God’s timing is impeccable.

The other day at my chiropractor appointment, a woman commented that the boys must be about a year and a half apart. I said she was right, and she told me about her boys, now grown, who are also a year and a half apart. I asked her if they drove her nuts at two and three. She laughed knowingly and recounted some of her own stories. “You’re paying your dues now. They’ll have fun together and be close when they’re older.” Some needed confirmation.

I don’t know what our everyday life will look like with this new little one. I’m sure we’ll still be a spectacle (which I’m getting used to at rapid speed) and I’m sure things won’t go according to plan, but I truly can’t wait to meet baby number three and include him or her in our circus.

6 thoughts on “Having kids close together”