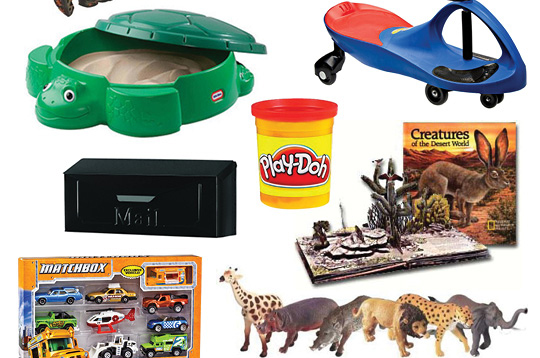 These are his favorites: I bought this toy cash register because I saw it on so many kid lists. I wasn’t sure how interested he’d be, but thought we’d give it a try. Both the boys (ages 2 and 3) play with it all the time. I won’t lie, I got sick of the play money floating around and then let them have about a fourth of it! It has a calculator and beeps when you swipe the toy credit card. I can see them growing into it for awhile.

Luca loves going on “adventures” around the house, and I knew he’d love a set of binoculars. These are kid-tough and can take a tumble. I also like that the string that goes around the neck will break in two — safer for my 2 year old.

Richard Scarry books were my absolute favorite books as a child. I love that my son shares my adoration for the artistic, educational series! He wants to read one of these classics every night before bed, usually The Best Word Book Ever.

Three year olds can start to appreciate the funny, tongue-twisted world of Dr. Seuss. The favorite, by far, around here is Go Dog Go! Oh my gosh, I’ve read this book so many times.

Pop-up books are fascinating to young children. Luca is obsessed with Creatures of the Desert World — so much so that a couple of his favorite animals are missing from the book, little stinker.

Luca has always been obsessed with animals. There’s practically not a night he doesn’t go to bed with a few carefully selected animal figurines. His brother loves them too. There seems to be a general bias across the board from kids I know for the big cats — cheetahs, lions, and such.

Both my boys play with their PlasmaCars every single day. I let them have it in the house (maybe that’s crazy), and they ride on it together, solo, make trains by hooking things to it. You can make it go forward by wiggling the steering wheel side to side, but they usually propel themselves forward with their feet. My parents definitely got their money’s worth on this one. It’s also one kids can grow into.

Little boys and their super powers. I got my little super heroes capes with a velcro fastener that can go with any outfit. It kind of drives me crazy when they want to put the whole Spider-Man suit on and then want it off two seconds later, so this fits the bill. (I’ve toyed with the idea of adding self-adhesive velcro to a shirt so it doesn’t have to go around their necks.)

On Luca’s birthday, my husband and I put up a mailbox in his room. We play post office with it, he hides things there, and one day I hope to leave him little notes when he can read.

Kids still love these classic cars. This mom loves Matchbox cars too, because they’re small and can easily fit in my purse to take out when they need a distraction. They can take a beating, they’re fun to collect, and cost about a dollar each. At Luca’s last party, I told friends there was no need to bring a gift, so someone brought a card with a Matchbox car attached. I’ve since copied her clever little idea.

Both boys really enjoy playing in the sandbox. I wanted one that had little seats on the sides and a cover. By the way, I read that if you put cinnamon in with the sand it will keep the ants away. We do it and it really does work.

At three years old, kids develop the motor skills and imagination to build things with their legos instead of just stacking them. You can try a Lego Duplo set to start. They’re bigger and easier to stack than the traditional smaller ones. However, the smaller sets don’t have too many pieces to build, so you might consider a bigger set that can have smaller sets added.

Play-doh is great for little imaginations. Make an animal or a pizza or a flower. You might be surprised by how far the age group expands. I often laugh at how long my not-all-that-creative husband will sit and sculpt things for the boys. He’s actually pretty good! A fun gift to go with it is the Fun Factory ($5).

This post contains affiliate links. This costs nothing extra to customers, and I earn only a tiny percentage. I do personally use these products, and all of the opinions expressed are my own. Thanks for supporting this blog!