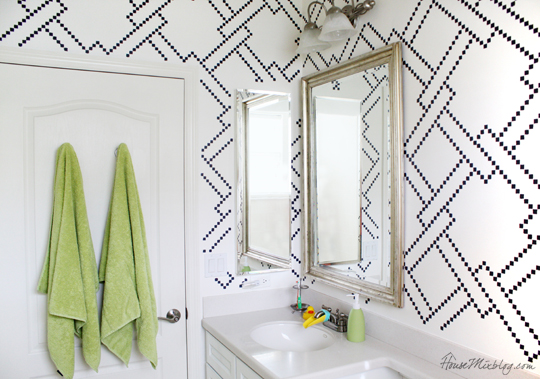 My goal for the bathroom was to give it a fun, youthful feel without making it feel completely like a kiddy bathroom. I wanted something that they can grow into by changing accessories and that still works for a guest bathroom. The previous homeowner did a fine job, I just wanted something a little more bright and modern for kids. Here’s what I did to make over the boys’ bathroom: The child inside of me fell in love with the Goldzilla shower curtain, and I became a little obsessed with it. I think I like it more than the boys. That bright plastic spout spits the water out farther so little hands can reach.
And now, onto how I stenciled the wall: It took me about 8 hours total.

You can now find this stencil here!

How to stencil a solid color on the wall

1. Spray adhesive spray on the back of the stencil. I tried to put the stencil up with a couple different kinds of tape and it did not work well. It is definitely worth it to buy the adhesive spray. It keeps the entire stencil stuck to the wall so the paint won’t seep beyond the cutout. This was paramount to me, as I chose to do dark navy blue on a white wall! I didn’t realize what a daring choice that was until I started.

I did a light spray on the stencil after each placement on the wall. This gave the paint on the stencil time to dry and assured it would stay in place for the next round. I did this by holding it up by one corner and giving it a thin mist outside. This was after trying it once inside on paper and making sticky mess on the floor.

2. Choose a starting point. I suggest starting at the top of the wall in the corner and working your way over and down. Use a level to make sure it’s straight.

Before I started, I read it was a good idea to start in the middle of the wall and work outward to help keep the design straight and centered. It’s a good theory, but I didn’t think it through all the way and ended up having to bend the stencil in half at the ceiling all the way across the wall. And that tested my patience. On the next wall I started with the stencil at the top, instead, which made my life a heck of a lot easier. You will, however, still have to bend the stencil around doorways and corners.

3. Before you take your first stencil off the wall, mark the small registration holes in the corners with a pencil so you can line the stencil up for the next round. My stencil lined up two or three little squares from the last stencil with the new stencil, so I skipped this step after the first round.

4. Blot paint onto the stencil. I wanted a solid color in my design instead of blended colors or feathering effects, so I opted for a sponge brush instead of a stencil brush. It allowed me to sort of stamp on the color at a faster pace.

5. Take the stencil off the wall and wipe off excess paint. Time to spray the adhesive again!

6. After you’ve finished the room, you can take a small artist’s brush and touch up mistakes. Very necessary for my navy and white combo! I admit, the stenciling was not all that much fun to execute. I probably won’t be stenciling again for a little while, but I am crazy about the results. I’m still smiling every time I walk in that bathroom because of the vibrant difference it made. And it was much easier than wallpapering, so I’m a happy girl. This post contains Amazon affiliate links. This costs nothing extra to customers, and I earn only a tiny percentage. I do personally use these products, and all of the opinions expressed are my own. Thanks for supporting this blog!