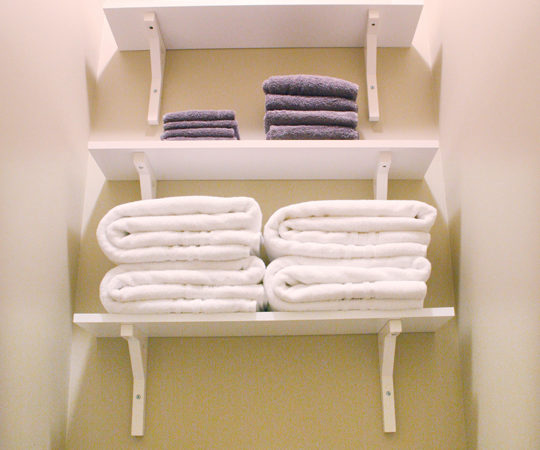 When we moved into our new house, the previous homeowner was proud to show me that she had converted the smaller “man” closet in the master bedroom into a very large linen closet. When I heard man closet, my ears perked up and I knew immediately it would need to turn back into the man closet. At last no sharing a closet!

The closet part has worked out splendidly, but we still didn’t have a linen closet. My solution was to put up Ekby Ikea shelves above the toilet in the bathroom for storing towels and toilet paper.

The yellowy overhead lighting was brutal on these photos, so I did my best to adjust. Also, this toilet room is tiny, so I had to close the door and smash myself up against the wall to get a shot. Hopefully you can still get an idea of the space. I bought new towels a few months ago because we had the same set for longer than I’m going to admit to on the internet. I bought white full size towels because I always love the crisp, clean look. But this time, I bought charcoal hand towels and washcloths to hide my makeup stains. The tag on the charcoal towels claimed they were somehow color-guarded so they wouldn’t turn pink. So far so good. And finally, I had two turquoise pieces to put on the top shelf, but I really wanted three. I decided to use an idea floating around on Pinterest to color something already in my pantry. I paid less than a dollar for this sweet little glass at Ross and used it as my experiment. I simply painted the inside of it with a few coats of turquoise acrylic paint (left from this project). It took a matter of minutes and it was up on the shelf.

Here is a look a the rest of the bathroom.