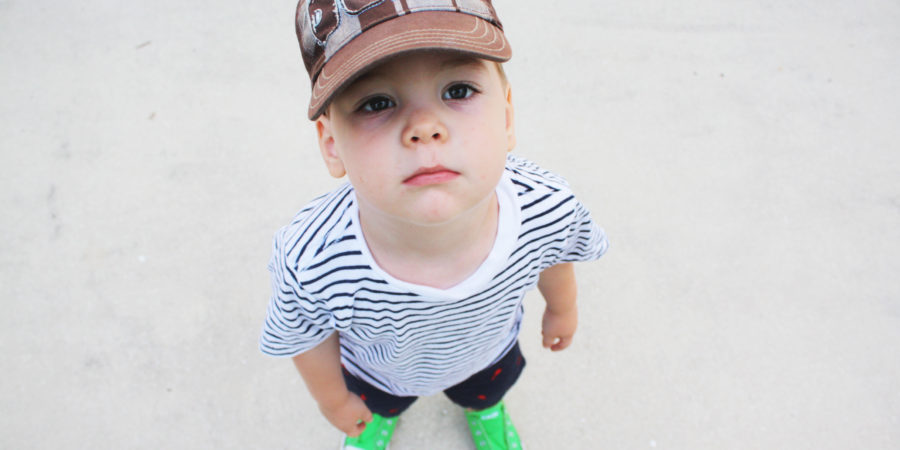 I don’t want to spend the day reprimanding and wagging my finger at my my two and half year old. I don’t feel like myself, appearing irritated and saying “no” every other word. And I certainly don’t want my boys to see me as a grouchy, bossy, stiff. I’m actually a pretty good-humored gal, but I don’t think you’d know it by looking at our everyday interactions lately.

It’s always something. Luca is chasing the poor kitty all around to sit on her. He’s going to “fix” the TV by pushing every button on the remote. He gets dirty dishes off the counter to bring to his little kitchen to “cook soup.” He grabs whatever toy his little brother is playing with and runs. He twists the cap off his brother’s diaper cream and gives himself a facial. If we’re out and I say it’s time to go, he bolts in the opposite direction. And then there’s the tantrum that follows each of these escapades after I say “no” for the one thousandth time.

But the one that’s about to send me to Crazy Town is when he pushes or hits his 13-month-old brother. Luca hasn’t done this much in the past, but it’s been a problem the past week. I see from watching him that there are three basic reasons he’s doing it: 1) he wants Adriano to leave his “guys” he has all set up in their zoo or barn alone, 2) he gets excited and wants to wrestle, and 3) he plain just wants to see what he can get away with.

Things were already escalating around the house with Luca’s nonstop antics that were wearing my husband and me down. We’re newbies. We weren’t prepared for a tiny tyrant. He was clearly in a fight to run the show, and I hate to say I think he was winning! But hitting his brother was obviously where we drew the line. We decided to snap out of it, wipe away our tears (ha!), and take back control.

Awhile back my best friend, Ashby, and I were talking about our sons’ terrible twos and confiding that it is much more difficult and exhausting than we expected. She said she’d heard good things about “The Strong-Willed Child” by Dr. James Dobson. So I bought the book, but it sat on my bedside table until this latest ordeal — which finally made me pick it up and read it cover to cover. I was pleased. It really gave me some solid ideas and the frame of mind to try a different approach.

These are the main points I latched onto, in case you’re interested:

After reading the book, I shared the major points (there’s much more than what I have here) with my husband so we could be on the same team. We agreed that one of our biggest problems is getting visibly frustrated. For example, when Luca deliberately disobeys, my face turns red as I slowly roll my eyes, trying not to yell. And then sometimes I do yell. I’ve even cried a few times in front of him out of exhaustion. I realize now that I was basically demonstrating to him that I didn’t have control of the situation. If he thinks I’m not in control then why would he listen to me, and how will that build respect?

We’re doing our best to stop yelling and start enforcing clearly set rules after only one warning. (His little bum barely left the time out chair the first two days, and making him clean up each of his temper tantrum messes took some patience.) It’s only been a short time, but we can already see it’s working. He’s taking warnings more seriously, but most importantly he’s made big time progress with not hitting his brother. This is what he said yesterday: “I want be nice to Adri. He loves me. I don’t push or I go in time out.”

Do we have it figured out now? Um. No. Like I said, we’re newbie parents and we’ve clearly got a long road ahead of us. We’ll probably have to read this book again and a dozen others in the coming years. I’m sure we’ll still be saying “no” more than we’d like, and I know he won’t stop his cat shenanigans and crazy facials, but so far, we do feel more enabled with our new stern — but loving — attitude.

Right after I finished the book, I was beating myself up on the way to a play date at Ashby’s house. The boys were both in their car seats in the back as I replayed all the times I’d yelled or lost my temper with Luca. I was feeling guilty and chastising myself. Then, Adriano accidentally dropped his toy and started to cry. Luca reached over to pat his leg and said in a sweet voice, “Don’t worry, bunny. We’re almost there. It’s OK. Don’t cry, baby.” Luca was using words I say to him to make his brother feel better!

Luca’s words to his brother was the medicine I needed. As moms, sometimes it feels like we say “no” or “you need a time out” or “don’t sit on the cat” all day long. We might not feel like the “fun” parent we wanted to be, but we’re being a good parent, looking out for our child’s best interest. And they do hear those sweet things we say to comfort them in their time of need, even if it doesn’t seem like it.

Luca is difficult, but he’s also hilarious. I praise God for his comic relief! This is a small slice of what I’m talking about: Train a child in the way he should go, and when he is old he will not turn from it.
Proverbs 22:6

Discipline your son, and he will give you peace; he will bring delight to your soul.
Proverbs 29:17