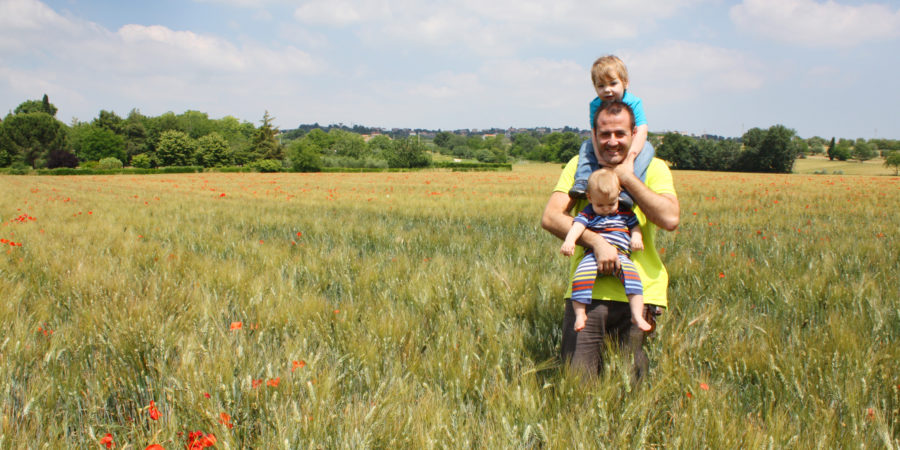 During a family trip this summer, Luca’s love for his daddy became beautifully obnoxious. In our normal routine, Luca spends the day at home with me while Marcello works. On vacation, though, we were all together every day for two weeks. That time cemented a bond between them that makes me happy and primally jealous at the same time.

One day Luca woke up from his nap asking for Daddy. That’s actually not unusual, but then he started crying and sobbing for him. “Sorry, you have Mommy now,” I said, trying to sound nice. “Want me to hold you?”

“No, Daddy.” And in case he wasn’t being clear enough, he looks at me with tears spilling out of his eyes and says “Marcello.”

What I wanted to say: Yes, yes, I know who Daddy is. He’s a great guy, but you seem to forgetting that Mama’s pretty fun too. And did you also consider that I’m the one who pushed you into this world, stay home with you every day of my life, always have you home for your nap time, make everyone be quiet while you take your nap, cut up all your food into little pieces, and basically act as your live-in servant?

He’s always been crazy about Marcello. His first word was Dada! I love that Luca holds such affection for his dad, but geez kid.

My youngest, however, has been a mama’s boy since he was born. His eyes light up when he sees me. He’ll reach for me no matter who’s holding him. He’s a snuggler and I love snuggling him. So in a sense, right or wrong, I was holding onto this when Luca repeatedly shot me down in favor of Dad. Until recently, that is.

Adriano, now one year old, isn’t a baby anymore whose one mission in life is to attach himself to mom for nurture and basic needs. No, his mission now is to have fun. And Dad is his go-to guy.

Now when they’re home with me, we rompus and play hide-n-seek, but I certainly don’t (and can’t) play with them all day. And definitely not with such vigor and strength as Dad those first 30 minutes he is home from work. He swings them up by their feet, side to side and around, ending in a flip. I’m exhausted thinking about it! And they can’t get enough. Adriano cries when Marcello puts him down. He throws his little body on the floor in protest when Dad walks out the door in the morning.

Then one morning Marcello told me, with a bit of disappointment in his voice, that Luca said, “I don’t want Dadda. I want Mama!” He was crying and screaming, determined to wake me up so he could see me.

“Really?” I asked, trying just a little to cover my enthusiasm. And this was the beginning of my comeback. He still adores his Daddy, but suddenly I’m starting to feel the love. He’s never been a cuddler — with anyone — but much to my delight he’s offering hugs and kisses and wants to share the chair.

I know it’s not a game, and Marcello and I don’t compete with each other or perpetuate it, but it still can sting when they show strong preferences. I’ve read psychologists say that this is a sign the toddler is secure in the relationship and knows you will still show love even if they reject you. If this is true, our kids must be pretty secure!