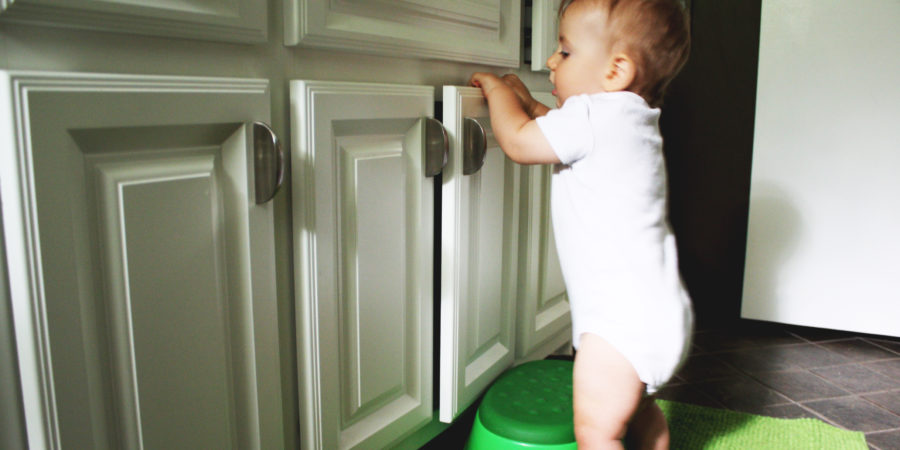 Adriano is almost a year old, which means he’s getting into anything he can get his hands on. Fortunately, his mischievous older brother prepared us, and our house is pretty well baby proofed. Yes, all one year olds get into things, but it seems Luca was a special case. As Marcello says, there’s baby proofing and then there’s Luca proofing.

When he was a baby, every single thing would go in his mouth — every crumb, grass, the cat’s tail, paper … (Adriano, of course puts things in his mouth too, like all babies, but fortunately not to Luca’s extreme.) Also, nothing could be left on a coffee or side table. In fact, we removed them altogether because taking everything off them was not enough. He’d just move the table itself around! And lamps. Until very recently, we had no lamps on tables because he would pull them from the cord. Floor lamps were also out because he would shake and knock them over. Well, except one that I duct taped to the floor, otherwise we wouldn’t have been able to see!

My mom likes to tell the story when — well, I guess when she started believing me about how mischievous Luca really is! He was small, just walking, and he was opening his dresser drawers and pulling all the clothes out onto the floor. During this process, he knocked over a box fan. So he crawled on top and proceeded to jump up and down on top of it while holding onto the wall. “OK, I get it,” she said to me.

Another stand out moment for me was when Luca was probably a little older than a year and a half. I watched as Ashby set down her phone, book, and hot tea on a little side table near her son (who is five months older than mine). I stared at the table intently as she continued our conversation, and he did nothing. He didn’t knock the tea over. He didn’t take her phone and run. Or take the book and try to tear a page out. “You just leave stuff on the table like this?” I blurted out, interrupting her. “I guess so, yeah,” she looked at me, confused. However, it didn’t take Luca long to start making his way over.

Later, I found out every time we came over she would quickly Luca proof her already baby-proofed house. Luca proofing at her place meant making sure no crumbs were on the floor from Trooper’s lunch, the door was closed to the laundry room, toddler chairs were up on top of the dining room table (because Luca would dangerously try to stand on them), remotes were out of reach, books were off the side table, and who knows what else.

It made it difficult to take him places. I usually had to contain him in the stroller with toys and snacks. One time I took Luca with me to bring dinner to friends who just had a baby. He walked in with me and went straight to a bookshelf they had with pretty decorative objects on them. He couldn’t leave them alone, even when offered toys and books and snacks. I actually had to go to the car and get the stroller for him to sit in inside their house!

He’s never been a very fussy or cranky kid. He’s always been sort of relaxed, but curious and unafraid. It’s an odd and deceiving combination! Ovens, knives, fire, and glass are much more interesting to him than boring toys. I’m happy that he’s a curious boy, but he’s about stopped my heart from beating many times. He’s almost two and a half now, and still, if he is quiet more than a minute I know he’s getting into something he shouldn’t be.

Here’s a look at some extreme Luca proofing we’ve had to do around our house: These photos don’t include the oven lock I had to buy after Luca tried to open the oven while it was on (which about gave me a heart attack). Or how we could never ever leave the bathroom door open because he would open the toilet lid for a variety of reasons (toilet locks didn’t work on our model). Or the fence we had installed around our pool that he was certain he could walk on.

By the way, if you have one of these curious kids yourself and find yourself needing to duct tape household objects, they do make white duct tape that will blend in with moulding. Also, invest in some Goo Gone because that stuff gets sticky after time.

Praise God, Luca has grown out of a lot of his mischievous ways. He will actually leave less-tempting objects on tables now (still no remotes or phones though), he does not put each and every thing in his mouth, and I can take him to visit friends without fear of his destruction. Now it’s little Adriano’s turn to go through his own exploration stage. Only time will tell how “curious” this one will be.