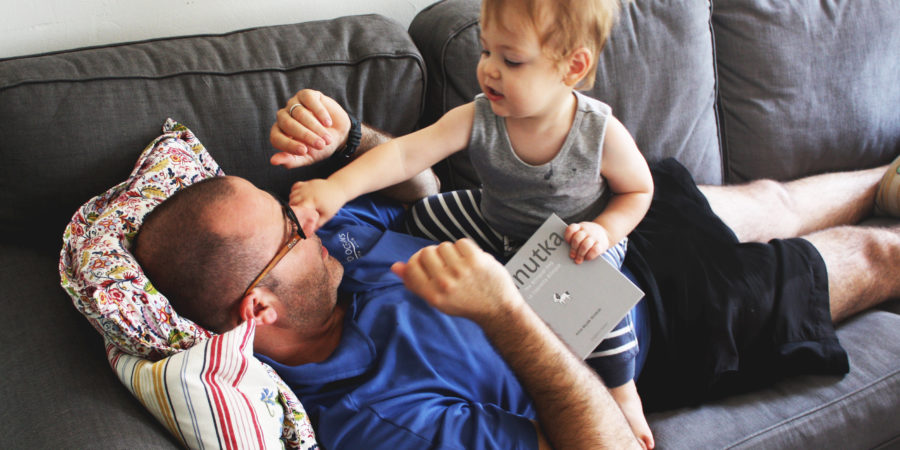 Nothing brings out the best of my motherly love than getting smacked in nose by a big toy dump truck my son has flung across the room. I know he didn’t mean to hit me with it, but I still have to suppress my anger as I gently rub my assaulted nose.

Along with many other things I didn’t know pre-parenthood, I didn’t realize that being a mother is painful. Literally, physically painful! When I’m sitting on the floor, playing with my youngest, and see my two year old come running toward me at full force, I can’t help but wince and say “Don’t hurt me!” Usually it’s a great big hug or he’s excited and wants to show me something, but I still get stomped on with little shoes, plowed over, or head butted.

Even with my 11 month old, I find myself saying, “be a nice baby,” as he gives me little baby slaps on the face. It’s a physical challenge just to get that wiggly little one to stay on the changing table. Changing that child’s diaper is like giving a cat a bath.

I feel like a lot of our day is a poorly planned slap stick comedy routine. Take the other day, for example. I was helping Luca back in his big boy underwear after going potty (because he can’t just go with them around his ankles apparently) and he was being NO help. I was bending over and he was swaying side to side, laughing and saying “whooooah, whoooooah.” Um, not so funny when my lower back is already on the fritz. Then I notice that Adriano is throwing toilet paper in the bathtub. I win the struggle, pull up the underwear, and lean over (again) to pick up baby. Just then Luca sees his beloved giraffe in the tub and slides the shower door to the other side to grab it. This slams my head in between the wall and shower door, knocking my glasses crooked.

Things like this add up during the day and become physically exhausting. And that’s on top of carrying babies during everyday household chores and bending over to pick up someone laying on the floor who’s hurt himself.

I’m working on my application to Muscle & Fitness Magazine because I’m sure they’ll be interested in featuring my biceps built from picking up, wrestling, and carrying babies every day. OK, not really. I’ve got scrawny arms that are too long for my body, but they have bulked up enough for me to start offering tickets to the gun show.

But that’s just part of the job description, I suppose. Along with being a cook, nurse, and caretaker, you’re also a horsey, jungle gym, and human swing. As one grandmother told me, “That’s why you have them when you’re young, dear.”