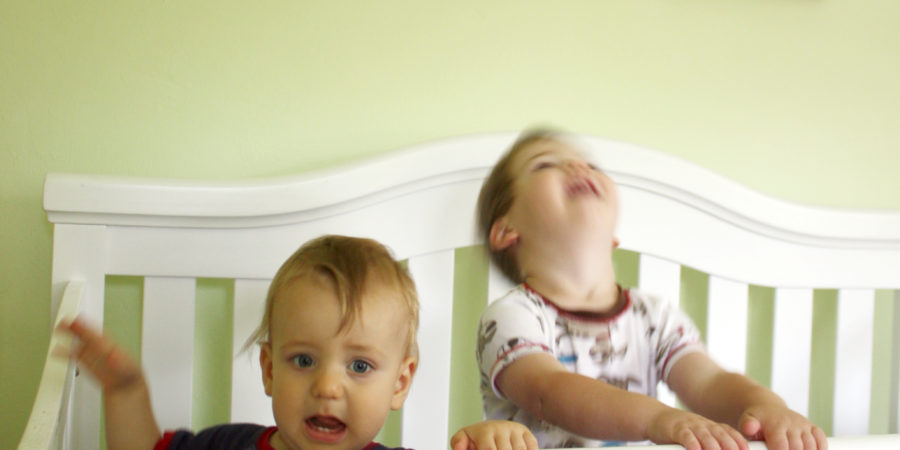 We have a small house with two bedrooms and two boys who need to successfully share one of them — and it’s not going well.

Siblings have shared a room since the beginning of time. Of the centuries of coroomhabitation (I made that word up), it stops with us? We’re the only ones who can’t make it work? What did pioneer people do if their kids kept waking each other up? And what about families with 10 kids? Does no one ever sleep? We only have two!

I have actually laid in bed at night thinking, “Well, that’s it. We’ll have to start looking for a new house tomorrow that has three bedrooms.”

When Adriano was seven months old, we decided it was time for him to leave Mom and Dad’s room. He was sleeping pretty well through the night (in his own crib), with one nursing at 4 a.m. We weren’t sure what would happen with him and Luca together, but it wasn’t working with him in our room anymore.

It would go something like this: Marcello started “breathing heavily” (he will tell you he doesn’t snore) so I’d tap his arm to get him to stop. My moving would wake Adri up and he would start moving. Once he started moving, I felt that I couldn’t move, which made me want to move even more. Marcello would end up sleeping on the couch, and no one slept well.

So the time came to move baby out, and here’s the rundown of the scenarios we’ve gone through since over the past several months:

I write all that out because I can’t find much chatter online about how people are coping with this situation. In most of what I read, Moms seem to be saying their kids were able to sleep through the other one crying or fussing. Unfortunately that’s not the case for us. More often than not, the little one still ends up in our room — and I’m about to lose my mind from all the bed juggling and lack of sleep.

Who knew sleep would be arguably the main focus of your child’s first years? Not me! I had not a clue how much time and effort and thought would be put into getting my babies to bed. We still haven’t figured it out and it will hopefully resolve in time, but it’s not easy. I know there’s no right or wrong answer to these dilemmas, but it’s good to share so we don’t feel alone in these times!