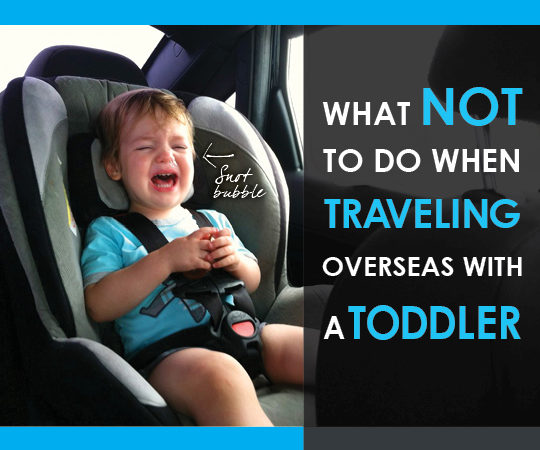 I cannot tell you with distinct clarity what to do with toddlers and babies when traveling long distances, but I can tell you from our experience what certainly didn’t work for us.

Marcello and I took Luca (2 years) and Adriano (10 months) to visit their grandparents in Italy. The vacation itself was lovely, but the trip was pretty much horrible. I’m talking flying cheerios, screaming kids on planes, missing flights, 7 hour layover, horrible.

Once we finally arrived, Marcello’s brother asked why the trip was such a disaster. Marcello rattled off a numerical list (as if he had been waiting for someone to ask him) on what NOT to do when traveling with small children:

Ha! I’m pretty sure he was serious, though!

2. Don’t schedule flights with layovers less than about 2 hours.

If you have to travel with small children, try not to schedule flights with layovers less than 2 hours. It’s risky if your flight is a little late. When traveling overseas, it takes extra time going through customs and security (again) with little ones. I made this mistake and our plane was an hour late, so we missed our connecting flight.

If the option exists not to have a layover, and you can in any way afford it, do it. We were stuck in the Madrid airport for seven hours after missing our flight. We were the last people off the plane after waiting for our checked strollers. And the last people off the plane don’t get first choice reconnection flights, which leads me to the next point.

You can probably get away with ditching your stoller if 1) you baby is small enough you’d be able to handle toting her in a carrier and/or 2) your toddler has boundless energy and likes to walk. (If your child is in between these two stages, you’re probably stuck taking one.) We brought two strollers on this trip, one for each child, and didn’t really use either of them. This was especially irritating, as I just mentioned that checking them caused us to be the last in line at the customer service desk. Luca wanted to walk, which was good because it made him tired enough to sleep for at least a little bit, and Adriano mostly stayed in the carrier on Marcello. I’m not sure how we would have pushed them in strollers while carrying and pulling all our other stuff, anyway. But poor Marcello ended up carrying the darn things the whole time for nothing. If you need one once you arrive, you can check it with your baggage. See some more thoughts about strollers, below.

5. Skip the car seat on the plane.

Unless your toddler is a real wild one, don’t take his carseat on the plane. We took Luca’s giant convertible carseat because he doesn’t hold still unless he’s alseep. We thought it would keep him contained and be more comfortable. Instead, it left him no leg room when the person in front reclined their seat, and he could not stop kicking it. He also wanted to lay down to sleep, which obviously didn’t work. And there wasn’t space to put the tray table down, so he had to rest the DVD player in his lap. Not to mention it was ANOTHER giant thing for Marcello to lug around all of God’s creation. Check it.

6. Don’t pack everything you can think of to entertain monkey.

If they’re cranky and screaming on the airplane, the fact that you have 10 coloring books or 50 different crafts is not going to help you. At least it didn’t help me. I packed so much stuff in our diaper bag that it was hard to even find all my clever activities. We had gone through all of them after two hours anyway. Although, wrapping toys individually as presents worked well for Luca. I saw movies on an iPad or DVD player seemed to work for most kids — not sure what’s wrong with mine. Next time I will put more thought into choosing activities and pack less of them.

7. Don’t overlook your travel time in its entirety.

Your total travel time is much different than the just flight time we see online. Don’t forget to calculate: 1) the drive to the airport, 2) the ticketing and security at the airport, 3) flight time, 4) lines to pass through customs 5) baggage claim, 6) baggage inspection, 7) drive time to final destination. Whew. This can tack on as much as five to seven hours. (I always forget it takes about two hours just to exit the door of the Miami airport after international arrival!) Looking at your total travel time allows you to plan for diapers and food. It also might make you reconsider traveling with little ones all together.

8. Don’t deprive your child of a nap in hopes he or she will sleep on the plane.

This wasn’t on Marcello’s list, but I’m adding it. I thought Luca would be able to sleep in the car on the way to the airport, but he was too busy crying the whole time. Missing a nap made him even more miserable. Always opt for more sleep. Believe it or not, we actually did do a couple of things right We had a somewhat painful experience, as you can see, but we saw plenty of parents traveling with little ones that looked happy, even relaxed. Hopefully with the lessons that we learned, and as Luca grows out of his terrible twos, we’ll be happy, relaxed parents next time!

2 thoughts on “Travel part 5: What NOT to do traveling overseas with a toddler”